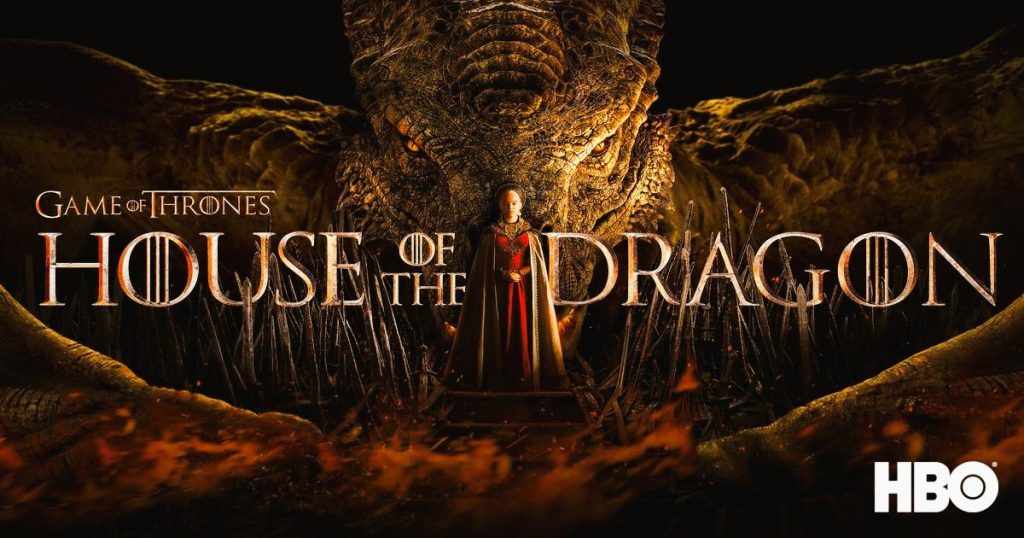 House of the dragon is an American fantasy drama television show. It is the second part of the franchise and a prequel to Game of Thrones (2011–2019), created by George R. R. Martin and Ryan Condal for HBO. Both television shows are based on George R. R. Martin’s A Song of Ice and Fire books.
The show’s creators are Miguel Sapochnik and Condal. The series, based in part on the book Fire & Blood, takes place 172 years before Daenerys Targaryen’s birth and roughly 200 years before the events of Game of Thrones. The “Dance of the Dragons,” the Targaryen conflict of succession, is depicted as well as the events preceding up to and covering the beginning and end of House Targaryen.

In Episode 1, Old King Jaehaerys I Targaryen calls a Great Council to select an heir after learning that both of his sons have died. Prince Viserys, Jaehaerys’ eldest grandson, is chosen by the Westerosi lords over Princess Rhaenys, his eldest grandchild. King Viserys plans a tournament to honor Queen Aemma Arryn’s pregnancy nine years into his rule because he is sure she is bearing his long-awaited male successor.

The Triarchy, an alliance of Essos’ Free Cities, has the potential to severely disrupt Westerosi maritime lines. Still, the Small Council chooses to ignore this threat, according to Master of Ships Lord Corlys Velaryon. Ser Otto Hightower, the Hand of the King, chastises Prince Daemon, Viserys’s brother and heir, for his cruelty as the head of the City Watch. Ser Criston Cole, a common-born Dornish knight, defeats Daemon in the tournament as Aemma passes away during childbirth. Baelon, the newborn boy, passes away soon after. Until Ser Otto learns that Daemon mockingly labeled Baelon as “The Successor for a Day,” Viserys rejects the council’s requests to anoint a new heir.

Viserys, outraged, exiles Daemon from King’s Landing and names Princess Rhaenyra, the only living member of his family, the new heir to the Iron Throne. In Episode 2, after Rhaenyra’s designation as the heir, Daemon illegally takes over Dragonstone with the help of obedient City Watch guards six months later. Rhaenyra’s plan to use force is rejected when Prince-Admiral Craghas Drahar, also known as the Crabfeeder, threatens the Stepstones at the Triarchy’s command. Instead, she is limited to selecting a new Kingsguard knight.
She selects Ser Criston, the lone knight with actual combat experience, disregarding the advice of others. Since the passing of his wife, Viserys has received private comfort from Lady Alicent, the daughter of Ser Otto; she suggests that he and Rhaenyra talk about his kingly obligation to remarry. Viserys is asked by Lord Corlys and Princess Rhaenys to wed their 12-year-old daughter Laena to reunite their two Valyrian families. While this is happening, the Small Council discovers that Daemon, who claims to be the rightful heir, stole a dragon egg and intends to marry his mistress Mysaria as a second spouse.

Ser Otto and a small detachment sail to Dragonstone to retrieve the egg. Rhaenyra follows on her dragon, Syrax, and forces Daemon to renounce his false claims and return the egg to her. Viserys announces he will wed Lady Alicent, angering Lord Corlys, who then seeks out Daemon to propose an alliance.

In episode 3, For three times, the conflicts in the southern Stepstones region have waxed. Lord Corlys and Prince Daemon fight Craghas Drahar and his rovers without support from the Crown, which remains neutral regarding the situation. Meanwhile, King Viserys plans a great hunt to celebrate his and pregnant Queen Alicent’s son Aegon’s alternate birthday. Rhaenyra resents the attention her father continually heaps on Aegon. Their relationship is further strained by the ailing King’s declaration that 17-year-old Rhenyra marries to form a strong accord and substitute their lineage. Among the suitors is Lord Jason Lannister of Casterly Rock, a match Rhaenyra opposes.

Lord Strong recommends that Rhaenyra wed Ser Laenor Velaryon, Lord Corlys’ son, to fix the broken bonds between the two houses. After being advised by Hobert, Otto persuades Alicent to convince the King to name Aegon as heir of the law, incubating the Hightowers’ power and prestige. Viserys convinces Rhaenyra that she is the heir and can choose her consort. After Ser Vaemond Velaryon begs for the King’s help, Viserys relents and sends helpers to the Stepstones. Seeing the arrival of his brother’s aid as the end of his opportunity to prove himself, Daemon uses himself as bait to ambush and slaughter the Triarchy, killing the Crabfeeder in the ensuing battle.

As for me, a fan of GOT, I really was impressed with the storyline and I’m optimistic that it will give us a run for our money. The dragon scenes, the introduction of arena games, etc has really boosted the show. But The presence of Cerci, Tyrion, Arya, John snow, and the Nightwalkers will be missed.

All the same. The House of the Dragon TV show promises to be outstanding, but guys, it can be nothing like GOT - Game of Thrones.