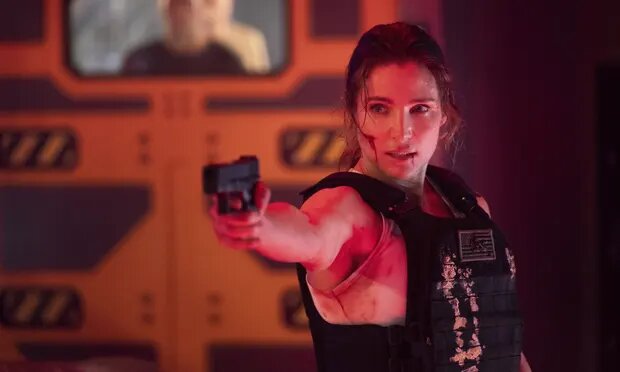 Matthew Reilly did wonders as the director of the action drama movie Interceptor, which he co-wrote with Stuart Beattie. Luke Bracey and Elsa Pataky both appear in the movie. Here is the trailer of the Interceptor movie. Spoilers ahead.

The first, Fort Greely in Alaska, is attacked by unidentified attackers who are likely affiliated with a terrorist group. At the same time, 16 nuclear warheads are simultaneously seized from Russian territory in the 92-minutes movie. The United States has two interceptor launch sites designed to intercept any nuclear warhead launches.

The second location is a remote outcrop in the Pacific Ocean. Recently, U.S. Army Captain J. J. Collins was sent to the second launch location for interceptor missiles. She reported sexual assault by a man in a high-profile case. After that case’s completion, she experienced hazing, bullying, and threats from her peers in the military as revenge, hence her new deployment to this remote station. Under attack by stray bullets, the survivors holed up in the command center.

The infiltrators attempt to negotiate entry into the command center, by which they can disarm the interceptor system and leave the continental U.S. open to nuclear attack from the sixteen stolen warheads. But when they are rejected, they try to force entry with blowtorches. After entering through a floor hatch, an agent launches a surprise attack, but Collins and Shah repel it and kill the attacker. Holding Collins and Shah at gunpoint while allowing Kessel and the remaining agents to enter and take charge, Baker awakes and confesses himself to be an inside man for the infiltrators, motivated by a huge payday and xenophobia. Kessel takes over a live feed to broadcast his online manifesto about the failures in American history, listing the sixteen American cities to be destroyed and giving the terrorist group the go-ahead to use nuclear weapons immediately.

While battling and eliminating Kira, the last enemy agent in the room, and another henchman, Collins manages to free herself from her chains and locks Kessel, Baker, and a henchman back out of the command center.
Collins rejects Kessel’s demands to submit while he tortures her father, and when the transmission is stopped, it appears that her father has died. Kessel switches to plan B and starts the station’s scuttling protocol to sink the station since he cannot seize control of it. Shah offers to manually re-engage the station’s hatches as it starts to sink, stopping the station from sinking in time for the interceptors to launch and detonate the warheads when they eventually pass through the airspace above. Shah descends through the floor hatch to the ocean below.

Shah succeeds, but Baker kills him. Collins makes the dangerous decision to hide in the command center while allowing Kessel, Baker, and the remaining henchman to seize control and shut down the ostensibly vacant facility. Her plan succeeds, and Baker looks for her on the station’s roof to get rid of her. While Kessel escapes the room, Collins can covertly eliminate the last of the henchmen. Intending to launch the interceptor missiles manually, Collins grabs a laptop and climbs to the roof. Baker discovers her, though, and the two fight hand to hand. Collins prevails after using razor wire to cut off Baker’s head.

A fraction of a second before the nuclear missiles would have crossed the point of interception, Kessel, who had earlier requested a Russian submarine to pick up the team of spies, locates Collins as she successfully launches the interceptor missiles. He fights Collins after realizing his plot has failed, and just as the Russian submarine emerges from the water, Collins can defeat and subdue him. A pair of Russians emerge from the submarine tower, but they fire at Kessel rather than Collins, and the Russian Captain pays Collins a final salute before leaving. Collins eventually fully recovers from her trauma in the hospital, and the American president personally awards her a promotion for her efforts.

Additionally, she is visited by her father, who friends saved after they saw his misery on the live broadcast, and he offers her solace for her loss of Shah.

Interceptor movie was released on May 26, 2022 and exclusively available on Netflix. Interestingly, the movie was not appreciated by reviews on IMDb, getting only 4.5 points out of 10.

On a scale of 1-10, I could honestly rate this movie an 8. The movie's climax was the suspense, the way it tugged at our heartstrings while we prayed JJ made it on time and wished so desperately that Alexander Kassel meets death. Elsa was not just amazing but took on the character and portrayed it as it should be with absolute vigor and facial expressions. I look forward to seeing more of Elsa Pataky on our screens. I never believed Reily would pull this stunt with such casts.