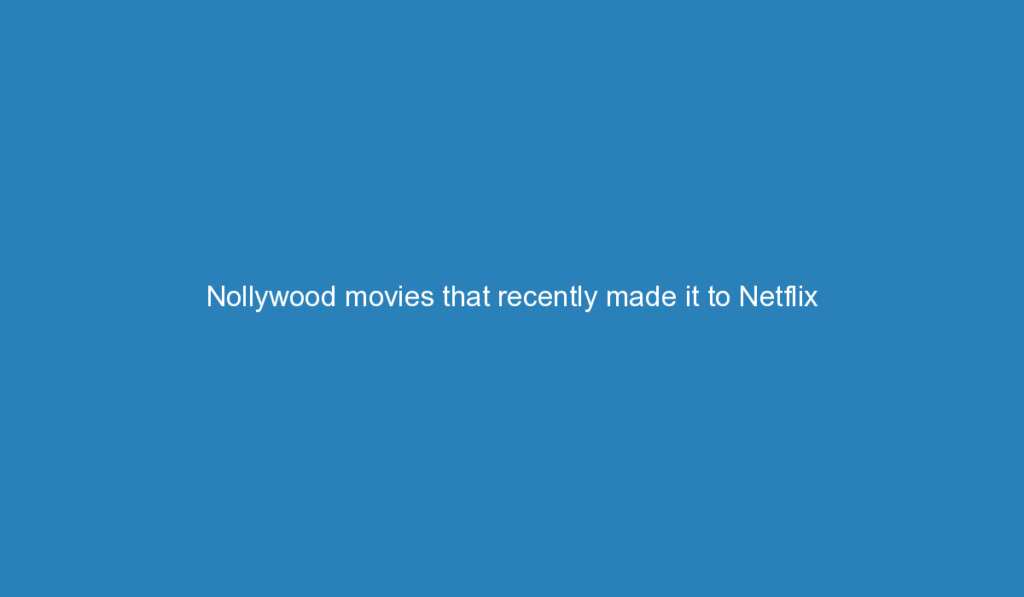 It’s no doubt the Nollywood movie industry is one of Nigeria’s greatest exports. In 2020 July, some of the latest Nollywood movies made it to Netflix, the largest movie streaming platform available. Netflix has millions of subscribers who seat at the comfort of their home to stream movies at an affordable rate. The Nollywood movie industry has been the major supplier of the Nigerian content to Netflix and Nigerians make up a good number of the total number of Netflix subscribers.

Nollywood lovers are in for a special treat this month of July as some of their favorite movies which they have been waiting for will make it to Netflix. So they don’t have to wait till the Cinemas open. Here is the list of latest Nollywood movies that are sure to keep you entertained on Netflix.

Nimbe is a drama movie that tells the story of a teenager suffering from parental carelessness. He is constantly being bullied by his friends but finds consolation, love, and relevance in the nearby hoodlums he was introduced to by an older neighbor he met by chance. He is introduced to dangerous vices including; drugs, hooliganism, thuggery, etc.

The movie was directed by Toke Alake and was budgeted at around $100,000. It was produced in English by Folarin Laosun and written by Ronke Gbede. It features stars such as Chimezie Imo (Nimbe), Odunlade Adekola, Toyin Abraham (Uduak), Kelechi Udegbe (AK), and Sani Musa Danja (Abu). The movie also featured Broda Shaggi, a popular acting comedian in Nigeria.

“The Millions” movie was produced by Chika Lann. It tells about Bem Kator, an attractive con man. Bem Kator is the ultimate guy, with good looks, sweet mouth and his intellect he can sell anyone. He plays deceitful cards in order to carry out the biggest money heist in history. However, he needed the services of three other con men to make sure the heist is successful. The heist didn’t go as planned because they all bore ulterior motives.

Your Excellency movie is a comedy story of a billionaire businessman but a failed presidential candidate, Chief Olalekan Ajadi who is obsessed with Donal Trump. He became a credible presidential seat contender when his dance moves made him a social media sensation.

Ah, this list wouldn’t be complete if I didn’t mention Sugar Rush. The story centers around three Sugar Sisters who discover a whopping $800,000. Things went south when the financial crimes commission and the owners of the money come for them but the money is missing. To save themselves, and save their abducted mother, they team up with 2 hired agents to re-steal the money from an affluent and dangerous man with mysterious powers.

Cold Feet is a drama-based story, which addresses infidelity in marriage and also encourages love, affection over perfection. The movie stars Jim Iyke who played the role of a retired colonel and Joselyn Dumas as his wife. Their marriage is put to the ultimate test – as they run into a mutual friend – an old love. The movie features Joselyn Dumas, Jim Iyke, Beverly Naya, and Enyinna Nwigwe.

The locked movie addressed the issue of ill mental health in our society. It tells of a young lady who took her fiance to visit her parents only to discover that her psychopathic mother has killed her father after she finds out he’s about to leave her for a younger woman. A woman who killed her husband held her daughter and her fiancé hostage.

“The Perfect Picture -Ten Years Later” extends the story of the three friends, Aseye, Dede, and Akese 10 years later. The girls, older, wiser but saddled with more issues which they didn’t expect in their “fairy-tale” relationships. They are now faced with the issues of imperfect husbands, apologetic ex-boyfriends, financial distress, and sexual freedom with the touch of a miracle that inspires their stories.