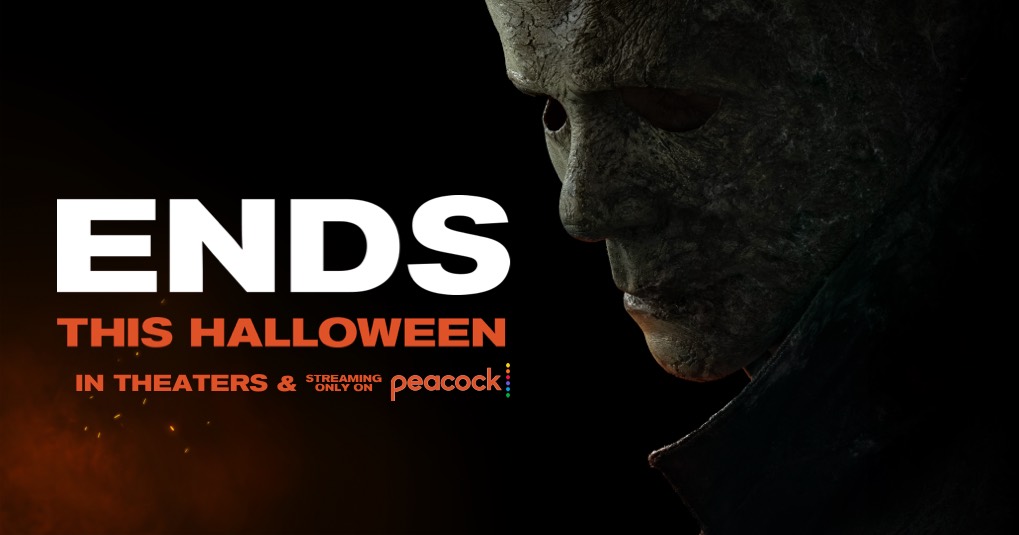 Ladies and Gentlemen of the horror fan league. Guess who’s back.
Michael Myres is back, and on October 14, 2022, the Halloween series will hit the big screens with a new horrifying yet satisfying piece of the white-masked cake “HALLOWEEN ENDS.”

We believe this might be the nail that seals off the coffin as it still stars Jamie Lee Curtis (Laure strides) who have been on this franchise for over 50 years and a woman who is rumored to pull out after this. Jamie, who was born on November 22, 1958 (my birthday mate), has starred in over six john carpenters Halloween series, from which she earned the name and title of a scream queen. This has led to a string of parts in horror films such as The Fog, Prom Night, Terror Train (all 1980), and Roadgames (1981). She reprised the role of Laurie in the sequels Halloween II (1981), Halloween H20: 20 Years Later (1998), Halloween: Resurrection (2002), Halloween (2018), Halloween Kills (2021), and Halloween Ends (2022). In 1997, she was inducted into the Fangoria Hall of Fame.

Halloween ends a sequel to the thirteenth part of the Halloween saga “Halloween Kills,” which brings to light quality kills from the great Myers himself (the shape). The movie opens by bringing to the screens a few new/old characters of the carpenter Halloween series. The most prominent is Tommy Doyle (Anthony Michael Hall), the kid Laurie babysat on that fateful night in 1978. He gets together with fellow survivors every year, including Lindsey Wallace (Kyle Richards, reprising her role from the 1978 original), Marion Chambers (Nancy Stephens, also from the first two movies), and Lonnie Elam (Robert Longstreet, not in the Carpenter movie, but the character is). They’re getting together on Halloween to celebrate surviving four decades after the most traumatic night of their lives, not having the slightest picture of what lies ahead.

Meanwhile, deputy Hawkins and Laurie reunite as coincidentally both meet and share rooms in the same hospital. There they reminisce past experiences in the process of recovery. Michael Myers escapes the burning house where they thought he was trapped and burnt to death. The shape hits Haddonfield in search of his sister Laurie and with the fresh hunger for more kills. With the news of the coming of Michael hitting the Laurie family, Laurie’s daughter Karen (Judy Greer, tries to stop Laurie’s granddaughter Allyson (Andi Matichak) from joining the mob formed by Tommy to track Michael down. As they chant, “Evil dies tonight,” they make, shall we say, some mistakes. Michael, in his classic blood-bathing skilled nature, slowly takes out the mob one at a time – killing them with pose and simple slashes that water the eyes of horror movie lovers till he tracks down the Laurie family.

For those of us new to this movie, let’s take you back to who Michael Myers is. Michael Audrey Myers (according to the movies) was born on October 19, 1957. Michael has many names, such as the shape, the boogeyman, the white mask, etc. He is known for his signature white Halloween mask. He is one big motivation for the best ghosty enemies in multiple movies, video games, and several other comics. Michael Myers is a horror figure with superhuman strength, endurance, the durability of an unknown limit, and stealth. What makes Michael Myers even scary is his silent ghosty appearance.

How did Michael Myers become a killer?

Fans argue that Michael was not always a killer but was built into one from the traumatic experiences he had in the psychiatric home after he was thrown in as a child. How did this happen?
In the first Halloween movie in 1978, Michael makes his debut kill at the age of six(6), murdering his sister (Judith Myers), who he stabbed severally after meeting her with her boyfriend on the bed; he was then taken to the psychiatric hospital by his parents. It is argued that he became hard-hearted as the trauma of his sister’s death, the rejection by his family, and his love and constant want for his mom, who wasn’t always there, pushed him to become who he is. Michael, throughout the movie, is involved in several kills as he tries every time to reunite with his family killing anything in his way, even his relatives.

What to expect in Halloween ends

Michael never dies. Somehow he comes back alive and torments people, especially Laurie; we expect to see him die for real, like for real. However, we will miss his horrific enterprise if he eventually does die. We expect more blood, bloodier than the one we saw in Halloween kills. It is rumored that The plot for the film does not follow Laurie Strode (Jaime Lee Curtis) and Allyson. Instead, a new character named Corey emerges. Corey is being bullied by the neighborhood kids when he stumbles across a very weak and injured Michael Myers. Myers hides from the citizens who attempt to kill him in Halloween Kills. Corey then takes the mask and becomes the pseudo-Michael Myers. He goes after those who have bullied him and presumably against others who have wronged him in some way. The test screenings for the film have naturally been bad because of the odd direction the final film is taking. We would agree that going off script for the final film in the trilogy is certainly not the way to go.
Many believe that introducing a new masked killer isn’t a good one. But let’s see how it goes as we gather to see for ourselves on October 14.