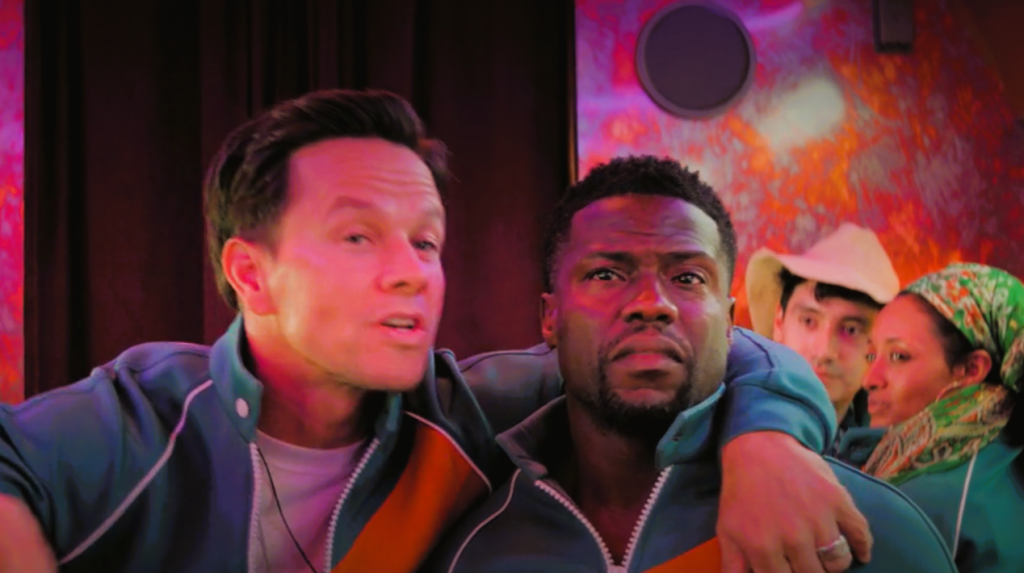 The comedic Netflix movie featuring Kevin Hart and Mark Wahlberg, Me Time, tells the story of a devoted stay-at-home dad. He gets some time away from being a hardworking father and a husband to a busy architect. What was supposed to be free time, a “Me Time” to explore other fascinating activities, became a wild weekend full of rough experiences like skydiving and fighting off a lion.

Netflix released the Me Time movie on August 26th, 2022. And, It is a 1 hour 41 minutes movie featuring Kevin Hart as Sonny Fisher, his wife, Regina Hall as Maya Fisher, and his friend, Mark Wahlberg as Huck Dembo. By the way, the movie was shot at Sunset Gower studios.

The following paragraphs contain spoilers for the Me Time movie, so if you have not watched the movie on Netflix, you can skip to the review.

The comedy movie starts with a funny scene set in Moab, Utah, 15 years before Sonny Fisher (Kevin Hart) married. It is Huck’s 29the birthday, Mark Wahlberg, and to mark the celebration, party attendees were getting ready to skydive from a cliff which they got up to using a helicopter.

The fear of high grips Sonny, and he wants out from the jump, not until the force of the air from the blades of the chopper about leaving sends him flying into the air, scared. This scene gives us the first laugh as Sonny tries flapping his jumpsuit to gain balance, but it doesn’t help.

Huck dives straight ahead to save him and reminds him to just spread his wings like a starfish. Sonny gets the hang of it for a few seconds until a fleet of birds interrupts him mid-air, sending him into a frenzy. Sonny, who promised to be present on Huck’s birthday, took back his words.

The movie continues with Best Friend Song by Rozzi as memorial pictures of Sonny and Huck slide by. Including Sonna’s wedding with Huck officiating it.

In present-day Sherman Oaks, California, Sonny plays his sit-at-home dad role, does all the chores, and keeps a tab of everyone before they set out for the day. He is also the PTA president in this kids’ school.

Sonny’s problems begin at a dinner table with his wife and prominent individuals, including his wife’s Client, Armando Zavala. He couldn’t contribute to the conversation except by mentioning that his daughter speaks Mandarin. To make it all worse, he gets insecure and overly protective when Armando touches Maya, his wife, on her shoulders.

The apex point of the movie begins when Sonny’s kids, Ava and Dashiell, and his wife, Maya Fisher, leave for a week-long holiday at Maya’s parents’ home. Sunny decides to be free and have some time for himself as his wife always beckons him. Sonny plans to hang out with Alan to avoid turning out like crossing-guard Lenore (Diane Delano) after a piece of misinformed advice from Alan Geller (Andrew Santino). Alan claims he is the boss in his house, whereas, in Alan’s home, he does not get any respect from his kids.

Sonny’s initial plan to have a release in his bed turns awkward when his daughter sees him. His wife had forgotten Ava’s fluffy and had to return immediately for it. After a series of failed fun-time moments – at the gold club, he lost to some old ladies – at the BBQ, he threw up – at the nightclub, he saw his school’s babysitter, Sonny had to go for Huck’s 44th birthday.

What started as an excellent time together for Sonny and Huck at Death Valley, California, turned sour when Huck’s loan shark debt surfaced. Huck was fired from an Ad company where he worked and was in debt to Stan Berman, an alternative revenue specialist. Huck owed $47000 to Stan, whose method of debt-recovery was unconventional, physical harm. The negotiation went sideways, and Sonny took a hammer hit in hand by Dorit because his Instagram post gave up the location of Huck’s birthday party, Death Valley, California. Based on Stan’s orders, Dorit went ahead to torch the party campsite.

On the way home in Thelma’s car, Topanga Canyon reminds Sunny of Armando – he believes he is in competition with Armando over his wife, Maya. Huck inspires him to take an act of revenge on Armando. Thelma (Ilia Isorely’s Paulino), Huck, and Sonny moved to Armando’s house to rain terror, shit on his bed, take the left leg of his shoes, and almost kill his tortoise, Ole Snappy.

The 44th birthday party was moved to Hucks’s house, which was wild.

Then comes the plot twist. Seal, the musician Huck said did him a favor, was paid to perform. Sonny paid off Huck’s debt using his and Maya’s life savings without her consent; Dash’s death star Lego was destroyed by Alan, Sonny’s car. Golden Chariot is smashed by an unidentified truck driver who everyone believes is payback from Armando. Maya and the kids couldn’t take it and had to stay away from Sonny.

Drunk and tired, Sonny realized he messed up his life and had to put the party hard-stop, chasing everyone out, including Huck, his best friend, whom he described as a Sad man.

The only good thing that happened on Huck’s part in Sonny’s house was the Seal’s cameo appearance, as Sonny was introduced as Dr. Silk. Sonny was doing Data Entry in Citibank while pursuing a music career. He has an album, but after he had a second child with Maya, he had to stay home. The song performed during Huck’s birthday is titled Crazy, and it was by Seal. The song was released in 1991 in Now! That’s What I Call Music 19 album.

The following scenes were about Sonny getting his life back, getting a new car from insurance, making it up to his wife, and learning the truth about Crossing-guard Lenore. Crossing-guard Lenore was said to be divorced by Alan. However, she has been married for 35 years, was a field agent in the FBI, and is giving back to the community by being a Crossing-guard.

During the Talent show in school, Sonny’s son Dash dubbed Little Silk, couldn’t play the song Sonny asked him to play on the Piano. Sonny had cut out some other kids’ exhibits so his son could have the last show. Sadly, Dash did not like playing the Piano and raised his voice while resisting being helped by his dad. At this point, Sonny owned up that he was making the Talent show about himself and not the kids. He stepped down and let his son do what he loved, stand-up comedy. While in the audience, Maya moved over to Sonny, and they had a re-uniting talk.

Meanwhile, Huck was done living the way he was, couch surfing with 20-year-olds after he overheard them slandering him. He took it up to himself to pay back the money he owed Stan by working for Stan and got Sonny’s life-saving refunded. While talking with Maya in the Talent show audience, Sonny got a $47000 transfer from Stan Berman. Surprised at how that could be, Sonny called Huck and traced Huck’s location to a boat in The Marina, where Huck told Sonny that Stan eliminates his debtors.

To save Huck from being cut into pieces, Sonny and Thelma dash down to the boat in Marina only to find Huck working as a maid for Stan. Sonny convinced FHuck to leave working for Stan, return the money to Stan, and start a business with him. They would be throwing parties for kids because Huck can throw lavish parties, and Sonny is good at entertaining kids. The trio leaves the boat but not without making a mess of Stan’s meal.

That’s the summary for the Me Time movie, do well to watch it on Netflix; you may enjoy it.

The Me Time movie was the combination of two funny personalities, Kevin and Mark, with a renowned comedy director John Hamburg, so I’d expected better.

In short, I would say the Me Time movie wasted my time; it’s not so Super exciting and engaging. I had a few laughs in the beginning, but there were some scenes where the joke didn’t come through. Some of the funny scenes were the regular kind and nothing new. One lesson from the Me Time movie is to be the best in your own thing. The film supports the same-gender parenting style – Bethany (Deborah S. Craig) and Diane, Combover Stew (Drew Droege), and Jeremiah Ripley (uncredited). However, they didn’t show much about those characters.

The talent show part of the movie disconnects from the context of other parts of the film. Was it will Dr. Silk and little Silk?

Not as funny as you would have expected.