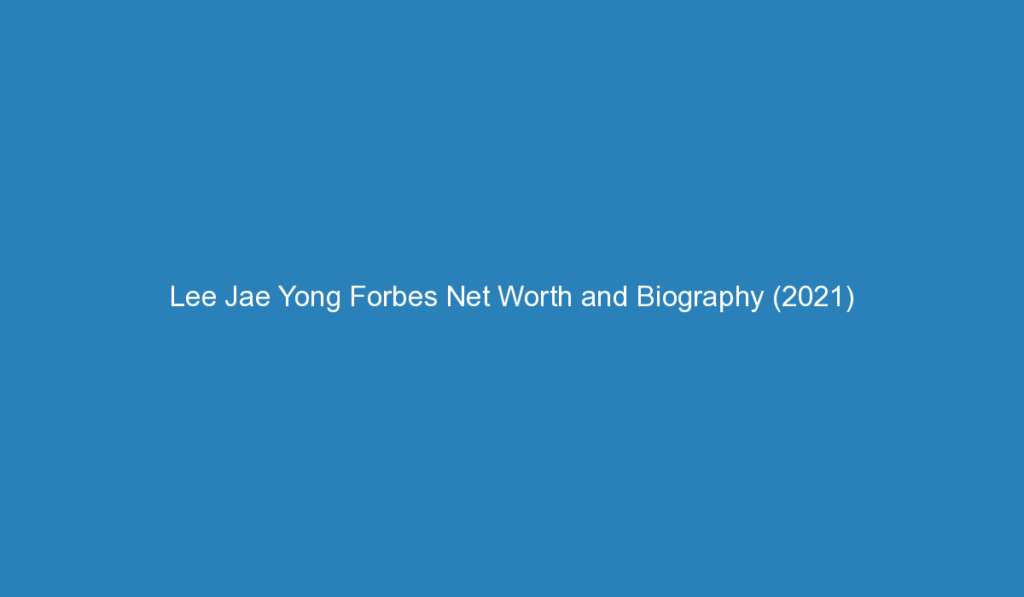 Lee Jae-Yong who is also known as Jay Y. Lee is a South Korean businessman and the vice-chairman of Samsung Group. He has a net worth of $6.9 billion dollars. He’s the eldest child and only son of Hong Ra-hee (Mother) and Lee Kun-hee (Father) – chairman of Samsung. He pursued a Doctor of Business Administration degree at Harvard Business School for about five years but did not graduate. He began working for Samsung in 1991.

As of 2021, Lee Jae-Yong’s net worth is estimated to be $6.9 billion dollars, making him the fourth wealthiest person in South Korea. He is in a position to be his father’s successor and serve as the de facto head of Samsung.

Lee was born in Yongsan District, Seoul, South Korea in June 1969. The 51-years-old (2020) businessman is a graduate of Seoul National University, Keio University, but not Harvard Business School. He has two younger sisters, Lee Boo-jin, Lee Seo-hyun, and was the older brother of the deceased Lee Yoon-Hyung, who died by suicide.

He is regarded as the “Crown Prince of Samsung” by the South Korean media and speaks Korean, English, and Japanese fluently. He is divorced.

In 2017, Jay Y. Lee was jailed and charged with bribing a confidante of the now-imprisoned former president, Park Geun-Hye, but was released in 2018. The judgment recorded his position as one of “passive compliance to political power.” He refutes the accusation and is appealing the case with the Supreme Court.

In September 2018, he followed President Moon Jae-in, President of South Korea, to North Korea as part of a business delegation. They met with North Korea’s vice premier Ri Ryong Nam today to discuss an economic partnership. Jay Y. Lee became Samsung Electronics’ president in 2010 and was named vice chairman of the group in 2012.

Lee Jae Yong is currently one of the richest and the most powerful men in South Korea, including the world. He sits as the second in command of one of the leading electronics brands in the world, Samsung.

Lee Jae Yong is one of the richest men in the world with an estimated net worth of $6.9 billion dollars as of 2021, his major source of income is Samsung.

In 2014, Lee was listed as the world’s 35th most powerful person and the most powerful in South Korea. Other Forbes list he made includes;