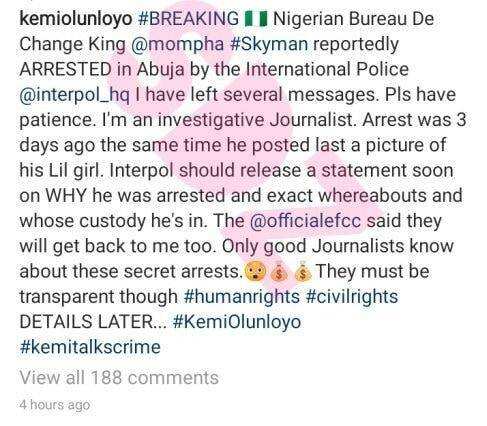 Mompha, Nigerian Instagram celebrity has been arrested by INTERPOL, an investigative Journalist reveals. Mompha was allegedly arrested 3 days ago at Abuja by INTERPOL.

Mompha is popularly known as someone who runs a Bureau De Change (an establishment at which customers can exchange foreign money). However, current news reports have it that Mompha is now under the claws of the International Police (INTERPOL) and is currently being interrogated at the EFCC.

Pls have patience. I’m an investigative Journalist. The arrest was 3 days ago the same time he posted last a picture of his Lil girl. Interpol should release a statement soon on WHY he was arrested and exact whereabouts and whose custody he’s in. The @officialefcc said they will get back to me too.

Only good Journalists know about these secret arrests.😲💰💰They must be transparent though #humanrights #civilrights DETAILS LATER… #KemiOlunloyo #kemitalkscrime”

Read also: These categories of people are the ones spoiling Nigeria 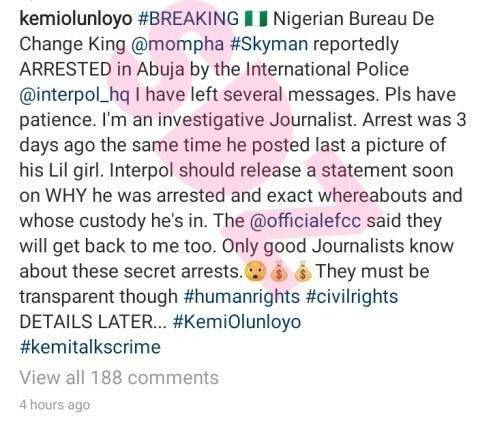 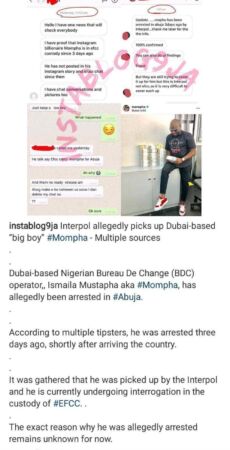 Although the EFCC has not made any public statement regarding Mompha’s arrest. One of the images above shows one tipster who suggests that Mompha’s arrest case is surrounding fraud which cannot be shoved under the carpet by the EFCC due to the INTERPOL’s involvement.