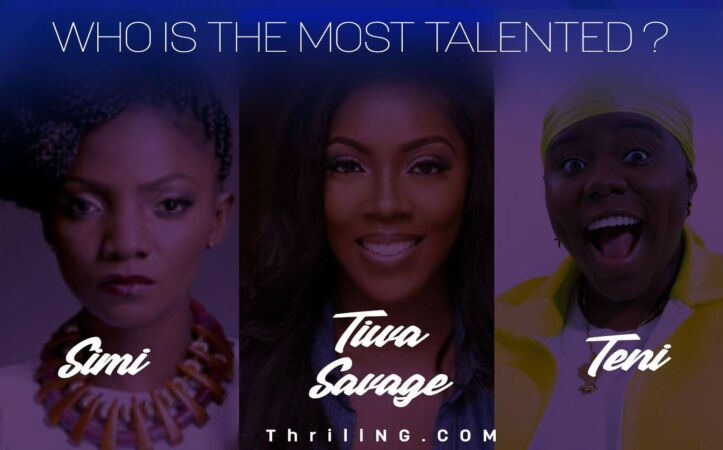 Let’s examine the top three talented female musicians in the Nigerian music industry – Tiwa Savage, Simi, and Teni to find out who is the most talented. We will study each of these talented female artists and leave you to judge who is the most talented of the three.
We will be studying the female artists by their names alphabetically, so you don’t think we have already rated them.

Simi, aka Simisola Ogunleye, is a talented Nigerian singer and songwriter born in Ojuelegba on April 19, 1988. She started as a gospel musician releasing her debut studio album in 2008 titled Ogaju. Her vocals top the chart.

Simi drew the spotlight to herself when she released “Tiff,” – a song nominated as Best Alternative during the headies award in 2015. Simi has been outstanding in her career and bagged several awards, too many to list. However, Simi didn’t make the nominations in the just concluded Headies award but was a rock star in the 2018 edition, going home with four awards out of seven nominations.

One of her songs with Patoranking – Jericho, took over the internet on release with over 4 million views. You can always count on Simi to deliver.

Teni aka Teniola Apata is spectacular. Born into the family of Apata on 12th December 1992, she is the sister to Niniola. Teni’s first song was “Amen,” which she did under Shizzi’s Magic Fingers Records. She moved to Dr. Dolor Entertainment in 2017, which was when she “blow.” And in case you don’t know it yet, Teni is also a good drummer.
Teni drew attention after releasing the single “Fargin” in September 2017. But her breakthrough came after releasing the hit singles “Askamaya,” “Case,” and “Uyo Meyo.” Teni’s “Askamaya” was ranked 15th on MTV Base’s year-end list of the Top 20 Hottest Naija Tracks of 2018.
Teni’s songs are widely accepted in Nigeria. one of her latest – “Billionaire,” is rated 4.0 out of 5.0. Despite being an audio-video on YouTube, Billionaire has close to 1 million views. Teni released an EP album titled “Billionaire” with five unexhaustible hit songs thanks to her nice tunes.

“Number one African bad girl,” aka Tiwa Savage, is a gem of a singer and songwriter. She was born on 5th February 1980 in Ikeja and had an impressive musical background. Tiwa Savage, during her high school days, played Trombone in her school’s orchestra but studied Business Administration at the University of ket.
Tiwas Savage started her professional music career at 16 when she sang backup for top musicians, including Kelly Clarkson, Mary J. Blige, Andrea Bocelli, George Michel, Blu Chantell, and Chaka Khan. Tiwa, a talented musician, performed background for Whitney Houston’s “I Look to You” album.
Tiwa Savage was once with Don Jazzy’s Mavin until the expiration of her contract, after which she joined Universal music group. One of her music videos, “49-99,” counts close to 6 million views on YouTube.

Who is the most talented?

Talent is a natural aptitude or skill. Many dispute that talent is created and not born, but I believe that talent is born. Teni, Simi, and Tiwa are all talented musicians, and it is tough to distinguish one as the most talented. I’d choose Simi when it comes to the most-talented amongst the trio. Leave in the comment section who you think is the most talented musician amongst Teni, Simi, and Tiwa Savage and tell us why.