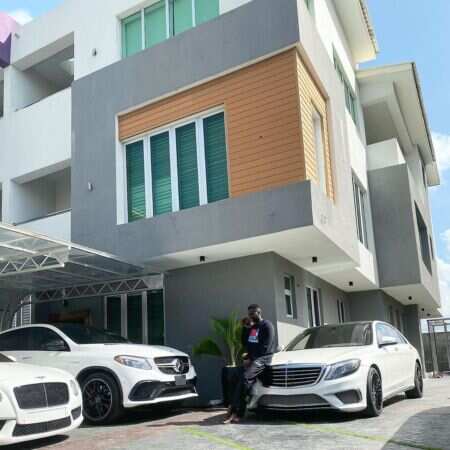 Kizz Daniel poses with his cars next to his house

After a record deal he signed with G-Worldwide Entertainment in 2013 ended up in a court case he left the label and created his in November 2017. Kizz started his music career with the stage name Kiss Daniel Before changing it in May 2018 due to the court case with his former record label.

Kizz Daniel has been working so hard to keep his head afloat in the music industry since the issue with G-worldwide entertainment. The issue was his will to breach the terms of his contract and exit the record label without fulfilling the terms of the contract. G Worldwide slammed him with lawsuits totaling N500 million. After the whole drama, Kiss Daniel was found innocent.

Kizz has signed quite some significant endorsements deals and has sold many records since his emergence in the music industry. In 2017 His net worth climbed when he signed his first endorsement with Hennessy which totals in millions. Other sources of income include performing in shows, featuring in music, and sales of music. Currently, he is also the CEO of Flyboy Inc, a record label of his own.

28-years-old Kizz Daniel net worth is about $1 million in 2020, although not Forbes verified. He is one of the richest musicians in Nigeria. He charges N1.3 million per show and his income can afford him the following cars

He has performed on international stages, seeling out event arenas in places like Toronto, New York, Chicago, and Cincinnati.

The singer started his music while in FUTA and hit the Nigerian music industry with his first music album, New Era through G-Worldwide Entertainment. The album contains hit singles such as “Woju”, “Laye”, “Good Times” and “Mama” and was released on 14th May 2016.

He released his 2nd album under FlyBoy Inc titled “No Bad Songz”, with 20 songs including “One Ticket” which featured Davido. Other artists such as Nasty C, Diamond Platnumz, Philkeys, Demmie Vee, Dj Xclusive, Wretch 32, Diplo, and Sarkodie were featured in the album. The album debuted at 55th position on iTunes Chart and became number 1st on the World Album Chart within 24 hours of release.

His third album, King of Love released on 25 June 2020. It was released under this Flyboy Inc and contains 13 songs. Pulse NG described it as a well-articulated afro-pop album in an article written by Motolani Alake for Pulse NG. His exact words were;

King of Love is a well-curated Afro-pop album for different Nigerian scenarios and emotions; wedding and love, gratitude and party, vanity and braggadocio, pettiness and anger.

Daniel has won many awards which brought him fame and fortune, including

His contribution to the music industry listed him as nominees for the following awards;

Kiss Daniel was born on 1 May 1994 in Abeokuta, Ogun State, Nigeria. He hails from Abeokuta North local government area and he attended Abeokuta Grammar School.  The singer graduated from the Federal University of Agriculture, Abeokuta, in 2013, with a degree in Water Resources Management and Agrometeorology (Water Engineering).

Kizz lost his dad, Kola Anidugbe on May 29, 2015, to typhoid. He shared an emotional tribute on his father’s birthday on June 17, 2015, where he described himself as the “Stupid son” who was not there for his father. Instead, he pursued fame and ditched his family cause he thought that typhoid that took his father’s life wasn’t serious to look into when the old man was alive.

Kizz Daniel is not married, however, he was seen playing love with an unidentified lady in a video. His love life isn’t known after his rumored baby mama saga and also his relationship with Chidinmma, a Nigerian singer. As he has now decided to keep his relationship off of social media.