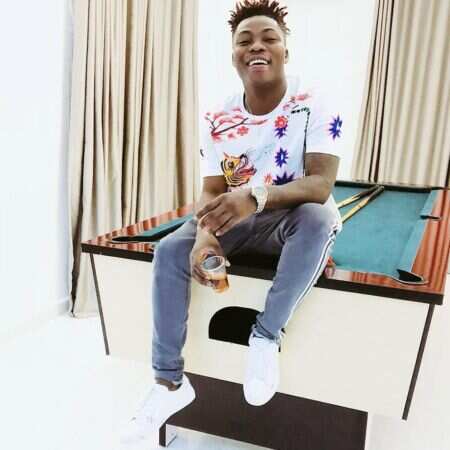 Who is Reekado Banks?

Ayoleyi Hanniel Solomon, otherwise known as Reekado Banks, is a Nigerian songwriter, musician, and singer, who started his career in the industry in 2008 but was signed by Mavin Records in 2014.

Reekado Banks rose to notoriety in the Nigerian music industry in 2014. In this post, I will share with you Ayoleyi Hanniel’s biography, career, current marital, songs, net worth, and some other interesting things you probably didn’t know about him. Before we continue, let’s take a quick look at his profile.

Famous for being a Nigerian singer, musician, songwriter, and for especially his affiliation with Mavin Records, Reekado Banks was born on the 6th of December 1993 in his country in Nigeria.

Born and raised in Lagos by his middle-class parents, Banks had a great time growing up alongside his other siblings. Whereupon his mother was a caterer at the time, his father is a Nigerian Pastor.

For his university education, Ayoleyi Hanniel attended the prestigious University of Lagos, otherwise known as Unilag for short, where he studied and obtained a Bachelor of Arts degree in History and Strategic Studies.

It is worth noting that Banks started his career in the music industry as soon as he graduated from secondary school in 2008.

Kick-started his career in the Nigerian music industry at the young age of fifteen, Reekado Banks rose to the limelight after his partnership deal with one of Nigeria’s popular record labels, Mavin Records.

Before signing this deal in 2014—or simply put, got signed by Mavin Records—Banks has been in the industry for four years without his craft getting the credits they truly deserved.

Discovered by his elderly brother whose name is Temi at the age of fifteen, Banks was and is lucky that his brother was an artist manager. Being an artist manager—at the time—Temi started training Banks on the ins and outs of the industry.

It is worth noting that his career in the industry took a new turn after his elder brother, Temi submitted some of his songs to Marvin Records without his consent. Then, Marvin Records was looking to sign an up-and-coming artist, and so Reekado Banks became the lucky artist because he was selected out of the 5000+ artists that applied for the opening.

Oh, and well, Ayoleyi Hanniel is not married, at least at the time of this publication. However, he has dated quite a couple of people, including Emem, a 20-year-old student studying medicine in the Dominican Republic.

Dated for a couple of years, the love-duo went their separate ways after the relationship failed to work out—’work out,’ spot what we did there? Thank you very much.

No, please. Amy Demure Solomon is Reekado Banks’ brother’s wife instead. Temi Solomon is the name of his brother who, as you may have noticed, is his manager.

Well, well, Reekado Banks is as tall, just like his net worth.

Whereupon his father is a Pastor, his mother was a caterer—at the time he was raised in Lagos. More so, he has a brother, who is also his manager and artist manager named Temi Solomon. Side by side, his elderly sister is a Nigerian gospel singer and songwriter.

Since he started his career in the entertainment industry as a musician and singer, Reekado Banks has released as many as 20 songs and counting. These are some of his songs:

Reekado Banks has an estimated net worth of between $2 million and $5 million. He earns his net worth from his career in the entertainment industry as a singer and musician.

What’s more, In July 2015, Reekado landed an endorsement deal with a popular Nigerian telecommunications company, Globacom. Besides, he charges over N700,000 for his performances per show and most of the income goes into keeping his record label running, maintaining his luxury, cars, and houses.

Who is the wife of this talented musical artist, Reekado Banks?

The truth is, Reekado Banks is not married at the moment, but he has been in and out of several relationships in search of his heartthrob. He once dated Emem, a 20-year-old student studying medicine in the Dominican Republic, a few years ago but the relationship didn’t lead to the altar.

Other results concerning his wife that you may come across over search results on google will return Amy Demure Solomon as Reekado Banks’s wife, but that is wrong. Amy Demure Solomon is the wife of Reekado Banks’ brother, Temi Solomon who happens to be his manager too. Ignore the false results and stick to the fact here, Reekado Banks is not married yet. From the look of things, the 26-year-old artist (2020) doesn’t have marriage in the scope.

How much is Reekado Banks Net worth in 2022?

In July 2015, Reekado landed an endorsement deal with Nigerian telecommunications company Globacom. He has an impressive net worth that earns him a spot in the top richest musicians in Nigeria. His net worth in 2022 is between $2million & $5 million.

He charges more than N700,000 for his performances per show and most of the income goes into keeping his record label running, maintaining his luxury, cars, and houses. His latest release, “Options” which featured Parker Ighile, a British music producer, has over 500k views on Youtube alone.