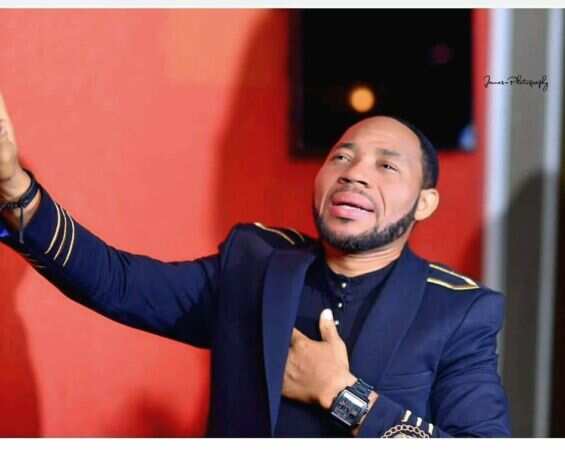 Daily as I live, often as I breathe, let my whole life be an expression of your Grace. This is one of the lines from “Abba Father” by Chris Morgan. Chris Morgan is an anointed minister of God with a call to save souls through music. Chris Morgan is a talented gospel musician who has had his fair share of hardship. During an interview with him while he was still signed at Apple of Gold Records. He recalled having to hawk to streets of Otukpo, in Benue state.

Chris Morgan was talented as his musical talents manifested while growing up in the red, dusty street of Otukpo in Benue State at the age of four. He recalled in an interview that his mum said he cried in musical tones. According to Chris Morgan, the talented gospel artist, something unusual happened to him when he was 12 selling orange and groundnut for his mother – Mrs. Regina Ochogwu. He was a member of Catholic Charismatic but had an encounter (described as unusual) with the Lord on the altar for three good days.

He did not have a music background and had no access to musical instruments owning to the fact that he was a groundnut seller. However, Chris Morgan recalled when he begged a Pharmacy owner who happens to own a keyboard, for music lessons. The Pharmacist chased him away beckoning on him to face his studies. Resilient Chris Morgan even offered to pay some money for the music classes. As time went by, the Pharmacist needed someone to manage his business in his absence, and that was hoe Chris Morgan got access to a keyboard, mastering the basic keys before the Pharmacist returned from his journey.

Chris Morgan moved on to join a charismatic band, there he picked up skills playing other musical instruments such as band, bass guitar, and even lead guitar. At the age of 15, Chris Morgan started writing songs. Chris Morgan also recalled of a vision he had when he saw myself singing with a very mighty microphone. While chanting, he would see a powerful hand holding a net and pulling people inside. He said that he saw God giving me a net, telling him that each time he sang, that is what will happen.

At the age of 16, Chris Morgan went to Lagos with a certain man of God who wanted him for a music directing job in FESTAC Town. From there, he encountered various opportunities which he embraced and delivered. Chris Morgan is now an established gospel minster who travels extensively and has made special appearances in both local, and international events and conferences. One major event which Chris Morgan ministered was Europe Premier Christian Gathering (The International Gathering of Champions), in London England, and the KICC Global Watchnight.

During his blessed career, he has ministered alongside other established men of God, including

Chris Morgan met his wife, Queen Eunice, a chorus leader in Dr. Paul Enenche’s Dunamis Gospel Centre here in Abuja. He went to Dunamis for a ministration and when he heard her leading the worship with such an angelic voice, he describes it.

He was so moved and wondered, who was this lady with such a “Holy Ghost-inspired voice”? According to the established gospel minister, one thing led to the other and he (Chris Morgan) fell in love with Queen Eunice and made the necessary procedures. Chris Morgan got married to Queen Eunice Ochogwu who happens to be a gospel music minister too. Their union is blessed with 2 sons, Samuel Ochogwu and Caleb Ochogwu. He lives with his family in Abuja, Nigeria, Africa.

Chris Morgan is one of a kind gospel minister who has mentored many gospel ministers too. He is currently signed under the EeZee Concept music label, alongside Mercy Chinwo, GUC, and Judikay. Chris Morgan is the brain behind “Worship on the Hills of Africa”, a vision that is dedicated to raising people to worship God as it ought to be (in spirit and in truth).

Chris Morgan wrote and released the song Arabaribiti in 2006 and it was the rave of the moment, sang across Nigeria by Christians. Chris Morgan songs which he has released since the inception of his career include;