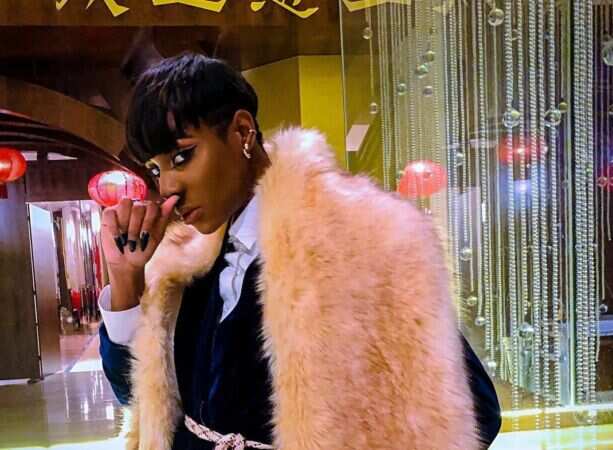 GoodGirl LA is a Nigerian singer and songwriter best known for her Afro-fusion genre. Her real name is Euphemia Runyi Ekumah.

She developed a passion for music since she was little and would mimic Whitney Houston. The afro-artist used to go by the name “Laden”, which was given to her by her friends, back then. The name “GoodGirl LA” was initiated to reflect her good girl personality and LA is short for Laden.

GoodGirl LA left her education to pursue a career in music, and asides from the art being her source of income, it’s also a channel for her to share her thoughts with the world.

Her journey through her music career has not been smooth as she encountered many challenges, including financial and gender-based stigmatization, but her passion and resilience were all she had.

GoodGirl LA was born on February 20, 1997, into a religious family in Ajegunle in Lagos, Nigeria.

She forwarded her studies at the University of Calabar to study Nursing but she dropped out at age of 19 to pursue a career in music, against her father’s wishes. Here is what she said during an interview with TheNativeMag.

I most definitely will not. I will, however, keep taking courses and hopefully a degree in music and music business

You may think she wants to further her education later, but GoodGirl LA is done with schooling.

GoodGirl LA is currently single and has not mentioned any man in to be her boyfriend or husband.

GoodGirl LA was already actively participating in music at a very tender age. She contested in several music competitions, including the renowned Nigerian Idol competition. We can’t tell if she came out glorious, but who cares now.

Her passion for music led her to enroll at the MUSON School of Music in Lagos, where she happily bagged a degree in the Theory of Music. A move she is forever grateful to.

She entered the spotlight with the release of an 8-track album “La Confidential”. The album spoke well of her creativity and she was marked as an “artist to look out for in 2019” by various reviewing platforms.

The album was rated 6 out of 10 by PULSE NG and it’s a reflection of her journey through life and her personal experience.

When she was asked by PulseNG whether she feels she’s on course in her career, she replied, “God doesn’t make mistakes.”

Her success is self-merited and owes no one any dues as she is the owner of the record label, GoodGirl LA Entertainment.

She was nominated in the 2019 Headies Award under the Best Vocal Performance category but she lost to Teni. She sees the loss as a great achievement and looks to win bigger laurels regardless.

She looks up to other iconic names in the music industry, such as Rihanna, Tiwa Savage, Wizkid, Asa, and Beyonce. And she learned most of her stage performances by watching  Britney Spears, Michael Jackson, and Beyoncé.

She longs for a duet with either Asa, Wizkid, 2Baba, or Tiwa Savage.

GoodGirl LA has to name several singles, in addition to an album that comprises eight songs. Her singles are listed below.

From the “La Confidential” album

GoodGirl’s net worth is an estimated $30,000, which is equivalent to N11 million naira.

She lives a luxury and expensive lifestyle which she portrays on Instagram. And owns a Mercedes-AMG GT 43 4-door coupe.

Her songs are played on almost every radio station you would come across in Nigeria and they sit at top charts on streaming platforms.