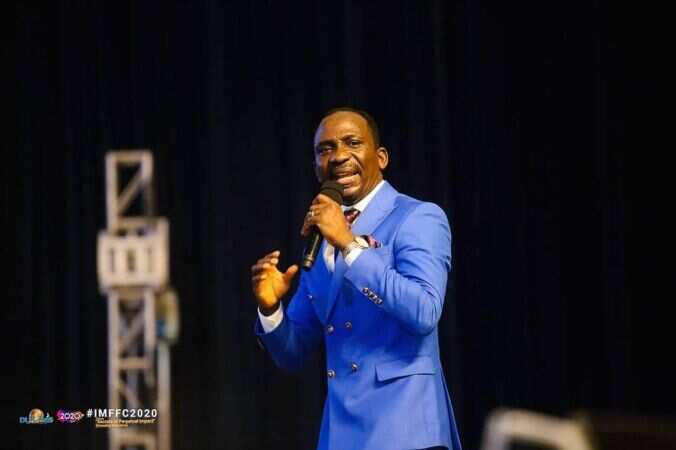 Who is Pastor Paul Enenche?

Pastor Paul Enenche is the founder and general overseer of the Dunamis International Gospel Centre. He is currently serving as the senior pastor of the church’s branch in Abuja.
The popular pastor is a brother to Major General John Enenche and Sammoses Enenche, a gospel minister who died on 20th July 2016.

His salvation came after many personal convictions and uncertainties about his eternity dawned on him. His ministry is influenced by God’s servants such as W.F Kumuyi, Pastor David Oyedepo, Pastor Enoch Adeboye, and Pastor Kenneth Copeland.

Unconfirmed report has it that Pastor Paul Enenche was once a member of the Presbyterian Church of Nigeria and Deeper Life Bible Church before he established DIG church in 1996, alongside his wife.

He was born into a royal family from Orokam, Benue State, Nigeria.

He was raised by his mother Titi Enewa Enenche.

Pastor Paul Enenche graduated from the University of Jos where he read Medicine and Surgery. He also attended a Deeper Life Campus Fellowship while in school.

The Dunamis pastor is married to Becky Enenche, a medical doctor and pastor. They met while in school, Becky was a spiritual daughter to him. Their love grew stronger and they got married in 1994.

Becky Enenche was born on 23rd October 1970. She is 2 years younger than Paul Enenche, her husband. Her name was Rebecca Inyangbe Ibu until marriage, she now bears Becky Enenche. She is a trained Medical Doctor, Pastor, Televangelist, Musician, and Educationist.

Paul Enenche and Becky Enenche are happily married and blessed with four kids.

Dunamis International Gospel Centre is one of the biggest churches in Nigeria, with branches all over the county.

Pastor Paul Enenche established the church on November 10, 1996, two years after he married his wife Becky.

The Church’s first church service was held at Abuja Centre for Arts and Culture.

After two weeks, the church moved to Abuja Sheraton Hotel.

In June 1997 the church moved to its permanent site and has since expanded in numbers.

On September 14, 2014, Dr. Paul Enenche commenced the construction of the Lord’s Garden, the church’s moniker for its headquarters.

Pastor Paul Enenche’s ministry is greatly influenced by Bishop David Oyedepo. Bishop David even arrived at the Dunamis International Gospel Centre headquarters to lay a stone in the foundation of the Lord’s Garden project.

Another massive structure owned by the church is the International Conference Centre and the church holds four (4) major conferences annually.

Doctor Paul Enenche created a Bible training program known as the Dunamis School of Ministry. He also created the Destiny College and Destiny Academy to groom pastors and leaders. He also founded Destiny Publications and his Church has its own satellite TV station.

Dr. Paul Enenche spreads the Gospel not only from the pulpit but also via his books and songs. He has already written about several books that have graced the library of most Christians in Nigeria.

Here is a list of Dr. Paul Enenche books

Paul Enenche has to his name few singles and an album, Heart’s Desire, which he released under Intimacy Music. Some of his songs include;

Paul Enenche is undoubtedly one of the richest pastors in Nigeria with churches all over the country. He is also an author of a ton of self-development books to his credit.

His income is not publicly declared, so his net worth is not estimated