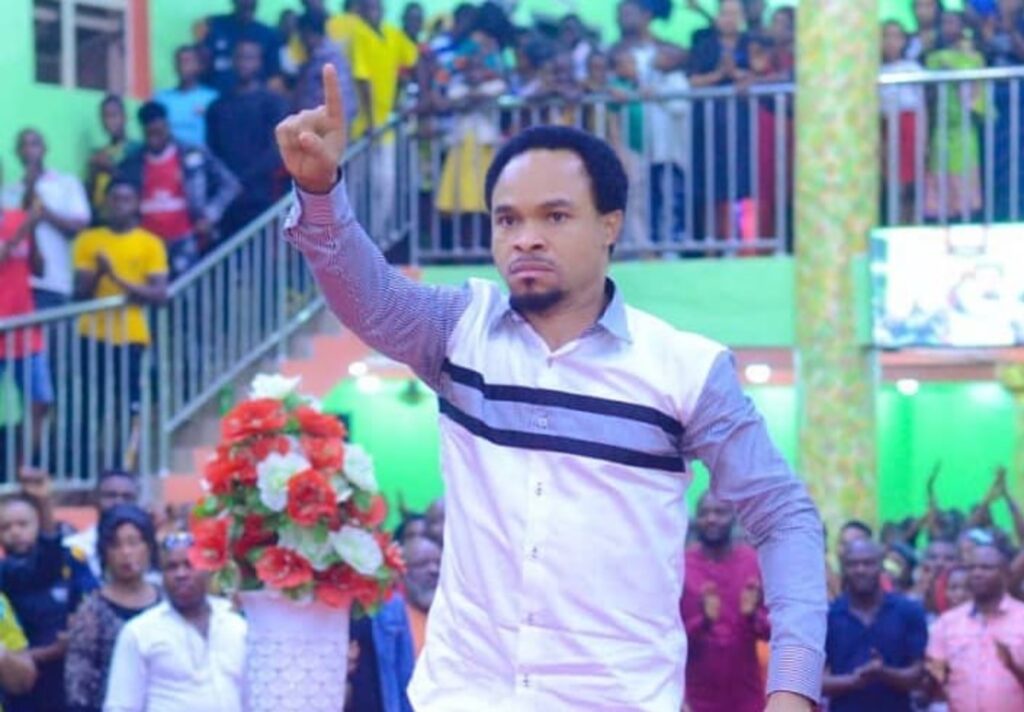 Chukwuemeka Ohanaemere is a popular spiritual figure born on September 9th, 1982, in Anambra state. He is best known for his comic style of preaching that involves some cinematic stage plays and highlife music. We went digging and have quite a handful of information about the Indaboski. We made sure this is an informative read about Odumeje’s biography, his family background, age, and net worth. We would his monikers such as Indaboski and Odumeje to address him often in the article. Odumeje means God, the one who leads me. He got the name after he released a track titled “Odumeje”, a few years ago. He is a controversial pastor, who is always in the news for the strangest approach which he employs while preaching to his entertained congregation. His approach to the things of God, particularly on deliverance and healing raises eyebrows and rumors.

Odumeje was born Chukwuemeka Cyril Ohanaemere on September 9, 1982, in Anambra state. He is the 3rd child in the family of six children of Mr. and Mrs. Pius Ohanaemere. He hails from Orsu Ihete Ukwa, in Orlu Local Government Area of Imo State, South East of Nigeria. He is 38 years old as of 2020, and he is described as a controversial and radical Nigerian pastor. He grew up in Fegge/Odoakpu, Onitsha, Anambra State. He is the founder and the general overseer of Mountain of Holy Ghost Intervention and Deliverance Ministry incorporated, a.k.a the Land of Freedom. His church is situated in Onitsha, Anambra, South East, Nigeria.

Odumeje had his secondary school education at Providence Secondary School after his nursery and primary education at Nweje, in a town in Anambra. He didn’t attend any university due to the financial difficulty faced by his mother who was the family’s breadwinner and a petty trader at Upper Iweka, Lagos park. He had to learn the leather business to make ends meet. That explains his poor knowledge of the English language. He loves music, acting, and football so much that he displays their trait even as he preaches on the altar.

He is married to Uju Ohanaemere, his wife, and his marriage is blessed with five kids, He welcomed the 5th child on 23rd August 2020. Odumeje’s wife, Uju Ohanaemere was born in the family of Rufus M. Ogbatuo in Obinikpa village, Umuobom town in Ideato South L.G.A of IMO state. Uju’s father, Rufu M. Ogbatuo married two wives with 11 children (six boys and five girls). The mother of Odumeje’s wife was the first and her name is Rose E. Ogbatuo.

During an interview, Odumeje revealed that his mother saw him becoming a great prophet and she relentlessly backed up his future with prayers and fasting, for her son. Ohanaemere became a laughing stock when news about his mother’s revelation got out. He became a devout Roman Catholic who worshipped at Sacred Heart Parish, Odoakpu, Onitsha. He later left Onitsha and lived with the monks at the Awhum Catholic Monastery, at Ninth Mile, Enugu State.

In 2000, he quit his leather business and other ministries he was attached to, began his private evangelism, and started a full private ministerial work. During the early days of his ministerial work, his mother remained his financial pillar. He started Mountain of Holy Ghost Intervention and Deliverance Ministry on September 10, 2010, in an open space located at No 14 Osumu street Odakpu, Onitsha, Anambra State. He later moved to Okija hall and subsequently to Arodizuogu hall, Odakpu, Anambra State. Indaboski’s church is now permanently located No. 88 Bida Rd, City Centre, Onitsha, Anambra with over 20,000 seat capacity. However, as of 2020, his ministry is reportedly raking in millions for Indaboski annually. White, 5 feet tall Odumeje is often criticized, owing to his model of healing and deliverance which involves throwing a person on empty chairs as WWE wrestlers do.

Indaboski’s ministry became popular in 2019 after a video of him doing the smackdown deliverance went viral on social media. His followers count in millions and not excluding popular Nollywood actor, Zubby Micheal. Indaboski also has a connection with other Nollywood actors such as Rita Edochie, Harry B, and Jerry Amilo. He released a music track, “Alabasidi” in July 2020. He also did a collaboration, Umu Jesus Christ, with Flavour N’abania, a renowned Nigerian musician. He has released songs such as

Since his newfound fame as a WWE pastor, He has since been dubbed as a ‘SmackDown Pastor. He also gave himself names such as, “The war”, “The fight”, “The lion himself”, “Indaboski Bahose”, “the liquid metal” the list goes on. He is so much fun to watch. During his WWE healing sessions, he is called “heavyweight servant of the most high”.

Prophet Odumeje was accused of staging miracles. According to reports, he was accused of a make-believe deliverance on the Nwaegbue Family of the Umuakwuelo Kingdom in the Etiti Village of Enugu Agidi, Enugu state. He was described as a false prophet by Pastor Ashimolowo of Kingsway International Christian Centre, KICC.

In October 2019, his followers in Indonesia were deported to Nigeria by the Indonesian government for publicly scattering bundles of dollars on the pastor while he was on the altar during his visit to Jakarta, the capital of Indonesia. Countless times, Emeka Odumeje has been seen dancing to secular songs several while spraying bundles of Dollars.

The Human Rights Writers Association of Nigeria (HURIWA) had earlier in 2020 urged the Central Bank of Nigeria (CBN) Governor, Godwin Emefiele, to arrest Prophet Odumeje for his serial abuses of the Nigerian naira and other denominations during his public events.

Chukwuemeka Ohanaemere aka Odumeje can be said to be living in affluence. His net worth is an estimated $500,000. He has in his possession flashy cars and mansions. Although he is not a man with a good fashion sense, he wears expensive shoes. In a philanthropic gesture, Odumeje visited the Ochanja market after a fire disaster where he gave out cash gifts totaling N4 million to the victims.