Adedeji Adeleke and Veronica Adeleke are wealthy, so it may come as no surprise that their son Davido has done well for himself in the Nigerian music industry. The 27-year-old artist has made a splash his music career. However, he himself admits that his wealth was not solely his hard work, and the star does have a reputation for making outlandish comments of fame on social media that sometimes draw the mockery of other users who comes at him for his voice. Being the son of a billionaire has lots of perks to enjoy, such as financial safety, but it seems it has plenty of downsides as well.

His wealth is often described as inherited. Yes, Davido was not born in Nigeria. He was born in Atlanta Georgia. He attended the British International School in Lagos for his basic education and at the age of 16, he moved to Alabama, US, to study business administration at Oakwood University.

David Adedeji Adeleke was born on November 21, 1992. His father Adedeji Adeleke is a billionaire multi-business magnate and his mother, Vero Adeleke was once a university lecturer.  The Nigerian musician who was born in Atlanta, Georgia is the youngest of five siblings and his father’s second-born son, according to Wikipedia.

The singer attended the British International School in Lagos. Moved to Alabama at the age of 16 to study business administration at Oakwood University. Instead of buying the voluminous course textbooks, Davido bought musical equipment while in school and started making beats. He joined his cousins, B-Red and Sina Rambo, to create a music group KB Internation. The “Risky” singer dropped from Oakwood University to give full attention to his music career he has been longing for since. He moved to London, trained his vocals, and returned to Nigeria in 2011. He did much work to fine-tune his voice but his fans don’t seem to be pleased with his range yet. They often tease him to have a frog-like voice. However, when Davido returned to Nigeria, he joined Babcock University and graduated in 2015 after his billionaire father single-handedly sponsored the school to start a music department for just Davido.

Davido is married and has plans for himself, his wife, Chioma, and his son, David Ifeanyi Adeleke.

How Davido earns his money

David Adeleke co-owns of the HKN music record alongside his brother. The trendy record label has signed in artists like Peruzzi, Sir Banko, Mayorkun, Dremo, Ichaba, Yonda, Dj ECool, Idowest. He has a collection of multiple awards he earned from his music career. Awards from the Headies, MTV music, sound city MVP, and other top recognized bodies. He also has endorsement deals with companies such as AXE, Infinix, MTN, Pennek, etc.

Davido tries to convince by his hard work and disconnect his success from his father’s affluence, but it’s hard to see. A fan who feels for Davido took to Twitter to state that the singer doesn’t deserve all the hate he receives. The singer responded saying he receives such hate because his dad is rich.

Davido has also explained that his wealth can cause some serious difficulty with a fellow artist who thinks his money was his key to the industry.  The celebrity is also quite active on the internet, especially Twitter. As many fans and observers know, Davido has plenty of opinions, and he has no qualms about voicing them on Instagram. But, as many fans have pointed out, some of his responses are a little odd on how money is everything, leaving many scratching their heads and wondering what Davido is trying to get at.
See Davido’s reply to a fan who mocked his child: 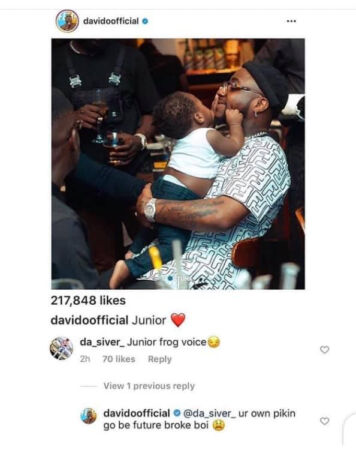 Davido’s net worth is what it is because earns N10 – N15 million per show in Nigeria, and $30,000 internationally.

The singer is an owner of 2 expensive houses, one in his birth town, Atlanta, Georgia, USA – $20 million. Another house is in Lekki, Lagos state and it costs N140 million. His Lekki house has two floors aside from the basement, a Jacuzzi, swimming pool, a well-equipped Gym. Shinji. In addition to Davido’s house in Lekki, he acquired another house in Banana Island which reportedly is close to a billion naira, affirming his 30-billion gang slogan.

Out of generosity, he also purchased an N45-million-mansion for his music producer.

Exotic cars are the next thing to Davido’s heart after his family. He has good taste for cars and wouldn’t mind breaking his account to buy anyone that catches his attention. Here is the list of cars he owns and how much they cost.

In addition to these cars, he has a private jet, although fans speculate that the private jet belongs to his father.

Davido has an impressive net worth. Whatever fans may think of Davido’s unique outlook on life, they can’t deny that he has been successful in the Nigerian music industry. That becomes especially apparent when it comes to Davido’s net worth.

The singer has an impressive net worth of $22.1 million, stemming from his efforts in the music industry and endorsements. However, one of his biggest income came in the form of endorsement with Transsion Holdings’ Infninx mobile. The contracts run into undisclosed millions of naira. He signed an N30 million endorsement deal with MTN in 2012. He also signed a multi-million Naira worth deal with Guinness in 2013. He covered Billboard’s magazine on Africa Now edition.

It’s also worth noting that Davido released all of his music on Sony Music Entertainment and RCA Records. This gave the Nigerian artist a huge international recognition and reach. With more efforts underway for Davido, his net worth could be growing soon.