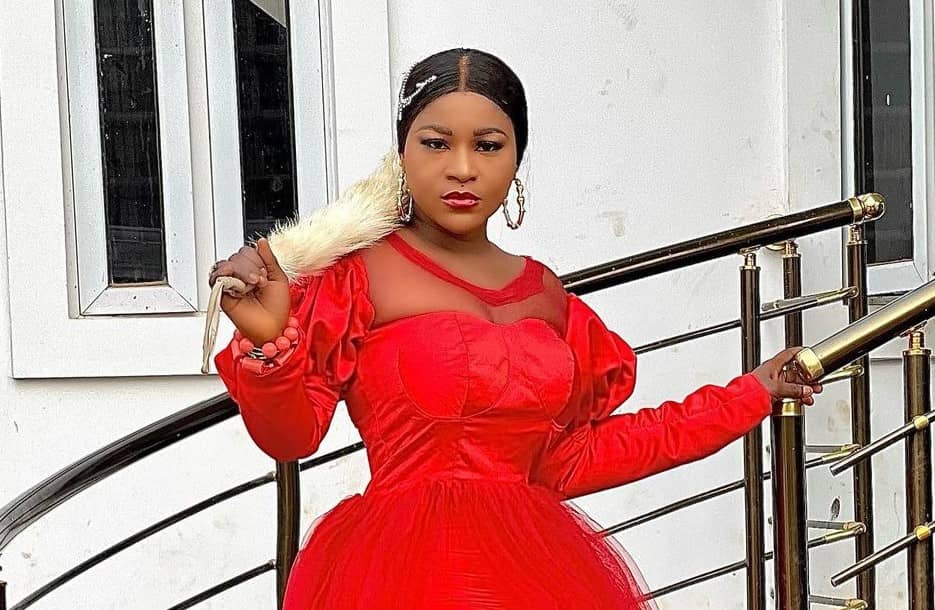 Who is Destiny Etiko?

Destiny Etiko is a Nigerian actress and one of the most popular in the Nollywood movie industry. She was born on 12th August 1989 and lost her father, Mr. John Anonde Etiko, on 15th May 2020.

Destiny got into the limelight when she featured in an award-winning Nigerian movie titled “Idemili.” Idemili is an epic 2014 Nollywood movie centered on native Igbo mystics and values. The movie producers coined its name from Idemili – a place in Anambra State- directed by Ernest Obi and produced by Onye-Eze Productions.

In this post, we wrote about Destiny Etiko biography, age, career, parents, husband, and net worth. Let’s look at her profile.

Destiny Etiko was born on August 12, 1989, in Udi, a famous town in Enugu State, Nigeria. Destiny is 32 years old as of the time. She was born and raised in Udi in a family of five children, three males and two females, where she is the second child.

During her early life, Destiny schooled in Enugu state at Zik Avenue Primary School for her nursery and primary education. She attended Queens school for her secondary education and obtained the essential certificates. Etiko forwarded her tertiary education in Awka in Anambra state.

Destiny Etiko attended Nnamdi Azikiwe University, where she graduated in 2012 with a bachelor’s degree in theatre arts. The talented actress completed the education circle in Nigeria before diving into professional acting.

Destiny Etiko stated that she drew inspiration to act from her mother, who is following in her footsteps. Destiny Etiko’s mother’s name was unknown at the time of this publication before she refused media attention. We cannot categorically tell if Destiny Etiko’s mum was once an actress. Still, in an interview, Destiny Etiko said that she didn’t want to make the same mistake that her mum did, leaving acting to raise a family. While Etiko received full support from her mum, her father, Mr. John Anonde Etiko, was not satisfied with her decision. He was afraid his daughter wouldn’t be able to cope with acting and raising a family because Destiny prioritizes her acting career over raising a family. Sadly, on May 15, 2020, Destiny lost her father.

Destiny Etiko is a Nigerian actress best known for her role in the hit movie “Idemili.” Her curvy body and acting skills are an added advantage. She steered into the Nigerian movie industry, Nollywood, in 2011, registering with the “Actors Guild of Nigeria.” During her professional acting conception, she featured in minor roles in several Nollywood films before landing the lead role in the movie “Idemili.”

Her appearance in the “Ïdemili” movie earned her a nomination for “Best Promising Actress” during the “City People Entertainment Awards.” She got more lead role opportunities from grace to grace, becoming one of the most prominent Nigerian actresses. After featuring in “Idemili,” Destiny landed cast in popular movies such as

Destiny Etiko has shared screens with prominent Nollywood actors and actresses such as Ernest Obi, Cynthia Okereke, Yul Edochie, Destiny Etiko, Patience Ozokwor, and Eve Essien, and even the legendary Pete Edochie, the list goes on.

Destiny Etiko is not married and has no engagement ring on her finger. Although, many people assumed that Destiny Etiko was married. But it’s simply a misconception due to a role she played in the Nollywood movie titled “My Private part,” where she shaved her hair because of the death of her husband and the allegation that she killed him. Speaking of marriage, Destiny Etiko revealed that she wants to marry a man who can understand her love for acting. She added that she is not ready to ditch her career for any reason; not even marriage or any man can make her leave movie acting.

She has won several awards, including the “Viewers’ Choice Award” and “Golden Icon Movie Academy Award.” In 2018, she landed a house for her mother, and a year after, she bought a Toyota spider for her mom. Destiny is a confident and bold woman known for being outspoken about personal issues like sexual harassment. In an interview, she opened up to admit that she was once victimized. She has a massive fanbase on social media, with up to 1 million followers on her @destinyetikoofficial Instagram page.

Destiny Etiko is among the wealthiest and most influential actresses in the Nigerian movie industry, with an estimated net worth of $700,000. She runs a charity organization, DEF, which stands for Destiny Etiko Foundation.