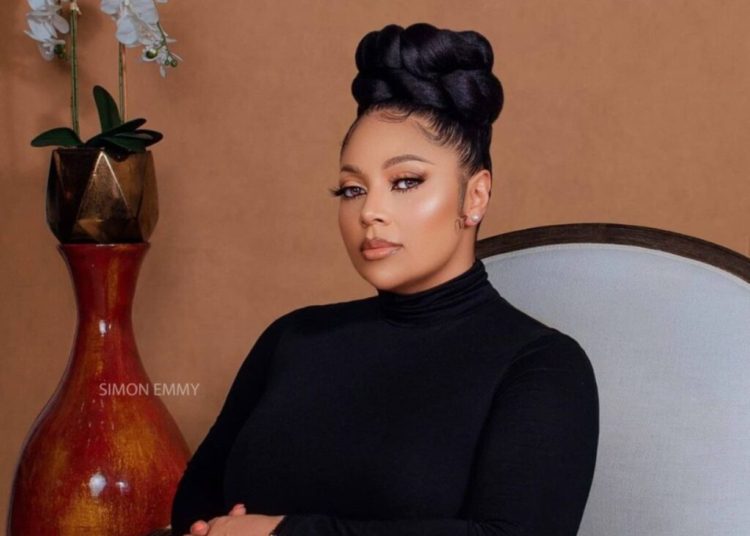 What do you know about the Lola Omotayo biography? Does she have the same parents as Tania Omotayo? How old is she? Do you wonder if she is older than Peter Okoye?

She is known as the wife of the Nigerian popular singer Peter Okoye, Mr. P, hence she is often addressed as Lola Okoye.

Although she is 46 and Peter Okoye is 39, the couple does not consider the numbers as anything. Despite all the rumors and slanders, they live happily in their home with their kids, a boy and a girl with pleasure.

Lola Okoye was born on September 2nd, 1974 in Nigeria.

Although she was born in Nigeria, she bears double nationality, Nigerian and Russian. This is because she was born into a family of a Nigerian father and a Russian mother.

Her father, Mr. Dipo Omotayo got married to her mum long ago before moving to Nigeria. He is the owner of Silco Drilling and Completion services – an oil and gas company based in Lagos.

She was admitted into the University of Ife to study Psychology in 1990 but left Nigeria for San Francisco University, USA to study Theater Arts. She made the move because of the periodic strikes in which the Nigerian universities embarked.

She has worked with some media firms and also as a Business development director. She now sits as one of the executives in her father’s company.

Tania was born into a family of Austria dad and Nigerian mom. Her full name is Tania Omotayo Teller, this means her surname is Teller, not Omotayo. Also, this clarifies that Lola and Tania are not from the same parents.

Peter Okoye and Lola Omotayo got married on 17 November 2013. They have two children, Cameron and Aliona, although Cameron was born in 2008 before their marriage. Lola started making headlines since her marriage to the Nigerian singer, Peter Okoye of former P-square.

She has no hand in the rift between Peter Okoye and his brother Paul. She proves this with an advisory post she made on the twins’ birthday on 18th November.

However, Paul Okoye says otherwise in response to her advisory post. He claimed that Lola is manipulative and does some “evil things” behind closed doors.

A little bit of information on Lola’s husband, Peter Okoye.

Peter Okoye is one of the singers of defunct group P-Square, a Nigeria famous R&B band composed of twins, Paul Okoye and Peter Okoye. They have an elder brother, Jude Okoye who is also a figure in the music industry.