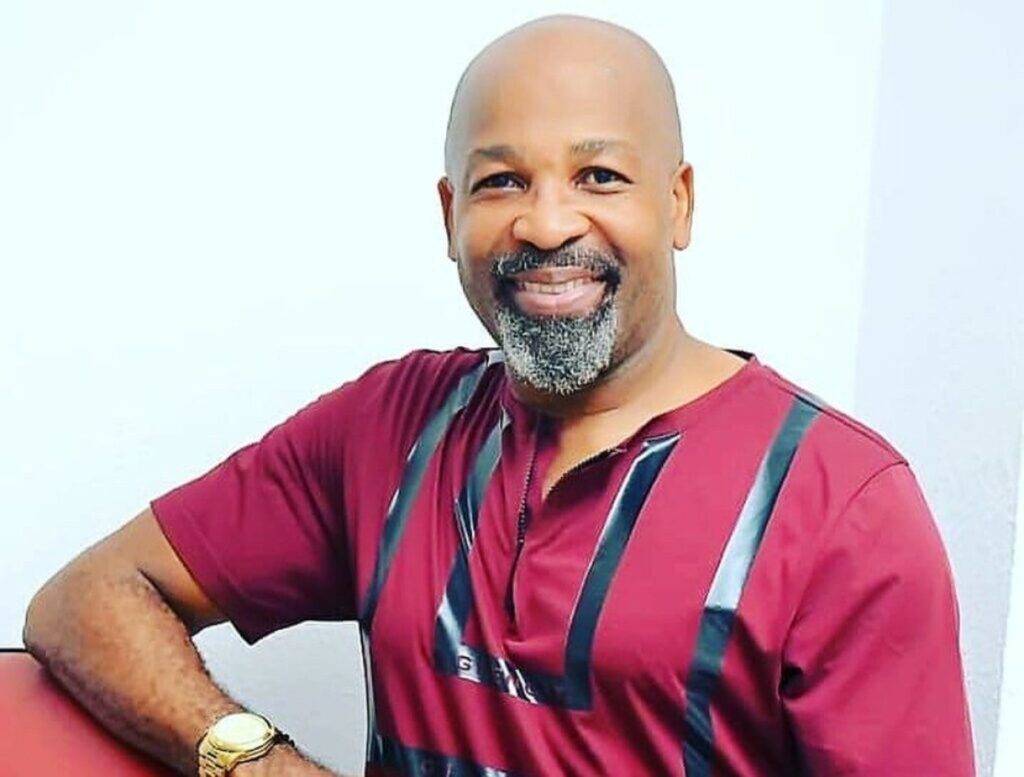 Yemi Solade is a veteran Nollywood actor and movie producer. He was born in Lagos on 31st January 1960. In the movie industry, he is popularly known for the roles he played in the movies Voiceless Scream, The Widow, and Elevator Baby. For this post, we will be writing about Yemi Solade’s biography, his family background, education, and net worth. We will also write about his new wife, Hannah Marsh, and why he married twice. Let’s look at his profile.

Yemi Etieme Solade was born on 31st January 1960 in Surulere Lagos, State – He is 60 years old as of 2020. His mum is from Oron in Akwa Ibom State and his dad is from Egba in Ogun State. During his early days in Lagos state, he grew up at Adeniran Ogunsanya, along Ogunlana Drive. He attended St. Acquilla primary school and proceeded to Birch Freeman Secondary school for his secondary school. After an attempt to get his A’level certificate abroad failed, he continued his education at Oyo State College of Arts and Science OSCAS as he prepared for JAMB. He attended the University of Ife which is now Obafemi Awolowo University (O.A.U), under the tutelage of Professor Wole Soyinka.

He graduated with a degree in Dramatic Arts from O.A.U and proceeded to ABU Zaria for a Master’s degree in Public Administration. He also acquired a degree in Sociology and Anthropology from Leicester University, U.K, and a degree in International Relations from O.A.U. He completed his National Youth Service Corps program in Maiduguri, where he taught in Ramat Polytechnic. He later moved to Kaduna Polytechnic where he taught general studies, communication skills, and literature.

Yemi is married to Hannah Marsh Solade, a woman he met while on the set of Wale Adenuga’s “Super Story”. He married Hannah after he divorced his first wife, a Shohuarab lady, on a religious basis. Yemi revealed in an interview that her parents wanted to Islamise him. His marriage to Hannah is endowed with two children, a girl and a boy named Rola Solade and Femi Solade.

Yemi started acting when he was 17, during Festac 77, an Arts and Culture Festival held in 1977. As a young Surulere boy, he was the dance champion in Lagos State for 3 years in a row that he represented Africa in world dance competitions in Spain. He made his first appearance on stage during a 45-minutes-monologue, titled “Crazy Youngie”, where he played the role of a passenger and driver.

After Yemi Solade completed his education, he lectured in universities and polytechnics such as the University of Maiduguri, Ramat Polytechnic, and Kaduna Polytechnic. He moved on to Kaduna where he became the Assistant Director of Kaduna music and drama society which was founded by the Deputy British High Commission. He later moved to O.A.U in 1993, where he was made the Artistic Director at Professor Ola Rotimi’s theatre company. He shot his first Yoruba film “Oju Inu” (Insight), which was directed by Wale Adenuga, owner of the PEFTI Film Institute. His team was the first to premiere a movie at Muson Center, but due to financial hurdles, the movie didn’t make it past that stage.

Yemi featured in every Wale Adenuga series including Papa Ajasco, to Super Story, This Life, and Odd World. He is popularly known for his role in movies such as Voiceless Scream, The Widow, and Elevator Baby. He has also acted in other movies such as;

He played the role of a lawyer in a drama series titled Borokini, where he acted as Olasupo Omoseni.

Yemi Solade is well known in the Nigerian movie industry, Nollywood. He was one of the earliest actors who built the foundation of the industry, especially the Yoruba side. He is employed for his bank of knowledge in movie directing and cinematics. He created TAMPAN (Theatre Arts and Movie Practitioners Association of Nigeria) alongside Adebayo ‘Oga Bello’ Salami, Prince Jide, Kosoko, and Dele Odule in 2009. He is also the president of The Shakers Foundation. His net worth is an estimated $500,000 according to various sources.