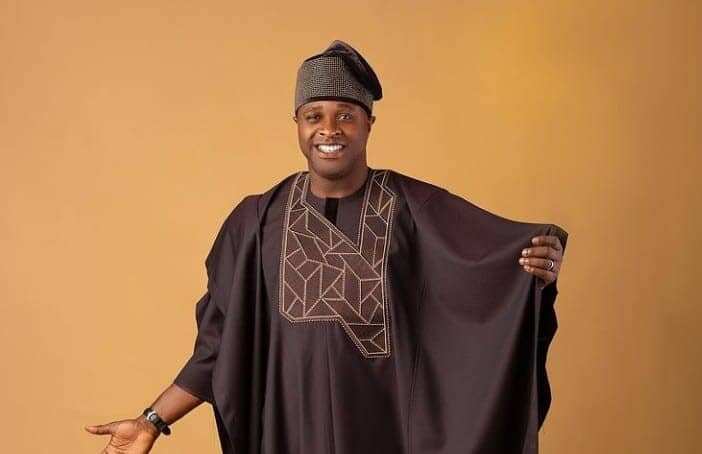 Femi Adebayo is a popular actor born and bred in Lagos state Nigeria. He is the son of the veteran actor, Adebayo Salami who is popularly addressed by his stage name Oga Bello. Femi was born on 31st of December 1972 into a polygamous family of many children. He hails from Ilorin, Kwara State, a state situated in the western part of Nigeria and pre-occupied by the Yorubas. Aside from being an actor, Femi is also a lawyer, director, producer and he was appointed by Abdulfatah Ahmed as the Special Adviser to the Governor of Kwara State on Arts, Culture, and Tourism in 2016. He developed a passion for acting after he saw his father appear on television, a passion which his father nurtured and groomed him into a professional actor. He started acting in 1985, the same year when he featured in his father’s first produced movie titled Ogun Ajaye. He has won notable awards since he began acting, one of which includes the Best Yoruba Actor award at African Film Awards. Let’s now dive into Femi Adebayo’s biography as we write about other facts about him in detail. We will write about his marriage, his net worth, and also his acting career.

Femi Adebayo Salami was born on 31st of December 1972 into the polygamous family of a veteran actor, Adebayo Salami aka Oga Bello. Being of a Yoruba descent and a Muslim, he hails from Ilorin in Kwara State. He was born in Lagos state where he also grew up. During his secondary school days, he attended the C&S College. He forwarded his higher education at the University of Ilorin (Unilorin) where he graduated with a bachelor’s degree in Law. He completed his education at the University of Ibadan (UI) and earned a master’s degree in Law.

Femi Adebayo was married to Khadijhat Adebayo from 2004 till 2008 when they divorced. He divorced his first wife who gave him 3 children because she was not comfortable with him acting romantic roles. He met Khadijhat in 1998 when she was a first-year computer science student and he was a third-year law student. Eight years after he divorced his first wife, he got married again to Omotayo Maimunat Sanusi. Femi Adebayo and Omotayo Maimunat Sanusi got married on 9th October 2016 and their union is blessed with a son. Femi’s second wife worked as an air hostess before she started a cafe shop, “Iyan Aladuke” on Montgomery Road, Yaba, Lagos. His children are Fadlulrahman Adebayo, Olatoun Olarenwaju, Fadlullah Adebayo, Firdaus Niniola Adebayo.

There was speculation that Femi was romantically connected with actress Funke Akindele which led to his first wife’s divorce. But he debunked the rumor, saying that he was just a friend to Funke and she has nothing to do with his break-down in his first marriage.

Femi’s acting began as a passion he developed while watching his dad on Television. His dad supported him and made sure his dreams of being an actor was realized. Femi’s first role as a professional actor was in a movie produced by his father, titled Ogun Ajaye. He took on that role in 1985 when he was 13 years old. In 1995, he featured in a Tade Ogidan‘s movie titled “Owo Blow”. In 1996, he won an award for Best Upcoming Actor of the year.

Femi is known for his role in movies such as Atónà, which was produced in 2009. He also acted as a lead role in a 2011 movie titled Ladies Gang. He has acted alongside top actors and actresses such as Idowu Philips aka Mama Rainbow, Segun Ogungbe, and Ibrahim Chatta. He is also known for the role he played in Omo pupa, 2008. Femi has acted in several Nollywood movies which including;

Some movies that he produced include, Sonto Alapata, Etiko Onigedu, Wura Ati Fadaka, Ma Wobadan, and Buga. His movie, Survival of Jelili is one of the Nollywood movies on Netflix. He has won awards which include

Femi Adebayo is the Chief Executive Officer (CEO) of J-15 Media Network Nigeria, a film training school located in Ibada which he established in 2008. He was appointed by the former governor of Kwara State Abdulfatah Ahmed as the Special Adviser to the Governor of Kwara State on Arts, Culture, and Tourism. However, the office was dissolved in 2018 by Alhaji Isiaka Gold, the Secretary to the State Government.

Femi Adebayo is currently one of the richest and most influential actors in Nigeria with an estimated net worth of $900,000. He signed a multi-millionaire naira endorsement deal with Trophy Beer. He has an ambassador contract with T. Pumpy Estate.