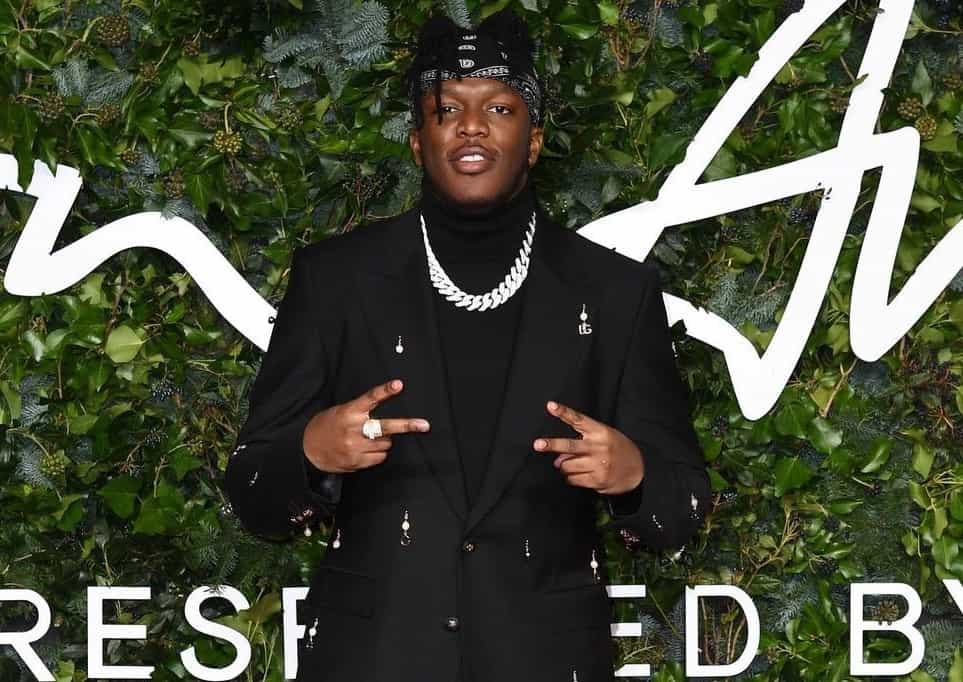 KSI is a famous YouTuber, internet celebrity, and musical artist known for his videos, songs, boxing, and FIFA game streaming. He has hinted in several interviews that he is worth more than $20 million and maybe up to $30 million. We will tell you his actual net worth; keep reading.

KSI is also part of the popular Sidemen group that creates viral reality and challenge videos on YouTube. KSI is the most famous member of the Sidemen group with millions of followers and songs and videos featuring big names in the music industry. As you already know, the Sidemen group was created in 2013 and comprised of seven British YouTubers, namely Tobe Brown, Ethan Payne, Harry Lewis, Vik Barn, Simon Minter, Josh Bradley, and JJ Olatunji, aka KSI.

You may have already figured that KSI’s other name is JJ Olatunji. He is of Yoruba origin, an ethnic group in Nigeria. This post will expose you to KSI’s net worth and how he earned his money. You may think KSI earns his money only from YouTube; that’s not the case. Read this article to the end and find out other sources of income KSI has. Before that, I will give you an overview of his profile.

Let’s talk about his net worth before anything else.

Any first-timer will assume KSI earns solely from YouTube; well, such a person would not be wrong. KSI’s fame came from his videos on YouTube. His career started with his JideJunior YouTube channel way back in 2008.

KSI’s net worth in 2022 is $30 million, accumulated from his various sources of income, including; YouTube, boxing, music, brand endorsement, awards, and merchandise. Aside from all those sources of income, KSI has other establishments, such as being a co-founder and member of the Sidemen group and co-owner of Prime Hydration together with Logan Paul.

In 2020, KSI owned more than ten residences in England, according to Menhealth.com. The properties owned by KSI are evaluated to be £10 million/$12.4 million.

As a show of philanthropic gesture, KSi has been involved in charitable events such as “Comic Relief,” “Stand Up To Cancer,” “Children In Need,” and “Sport Relief.”

He was also part of Castro1021’s online charity broadcast. His Sidemen brothers raised about $500,000 for other charity organizations such as Childline, the Saints Foundation, and the Charlton Athletic Community Trust.

In 2015, he took part in the Race Against Slime fundraising event for SpecialEffect, a gaming charity for the differently-abled.

In 2020, KSI made donations to Black Lives Matter Global Network Foundation and other organizations supporting black people. In 2021, he pledged £10,000 to Comic Relief at the “LOL-a-thon” on BBC Radio 1.

KSI also made clothing donations to the Seaview Project. The following year, he joined “The Independent’s” Help the Hungry campaign and the “Evening Standard’s” Food for London Now campaign.

KSI sang on the charity single “Stop Crying Your Heart Out” for Children in Need, where only money could not serve.

Now to the fun part, how much does KSI earn from YouTube? A million? Ten million?. We don’t have access to his YouTube accounts to get the exact amount. However, if my calculations are accurate, KSI makes an average of $400,000 monthly from his YouTube channel alone. In a year, his YouTube accounts generate $4.5 million, according to goal.com.

His YouTube channels combined have been viewed up to 8 billion times.

KSI started his YouTube career in 2008 by streaming FIFA games. He dropped out of school in sixth form college when he found that he was making money from his FIFA gaming–commentary videos. He added up various games and vlog-style videos, and by 2012, KSI had amassed one million subscribers.

Fame and traction came, he moved from FIFA videos to GTA games, and now KSI is known for his Twitter commotions which leads to boxing fights. His main YouTube channel, KSI, currently has about 5,867,512,569 views. Don’t worry about that figure; it was also difficult for me to read. However, it is easier to say that KSI has had more than five billion views on the KSI YouTube since 2009.

KSI joined the Sidemen bandwagon in 2013. He was an integral part of the British YouTube team in their sketches, challenges, and video game criticism. The group managed four channels: “Sidemen,” “MoreSidemen,” “SidemenReacts,” and “SidemenShorts. The group also owns the Sides restaurant chain, which began operation in November 2021, and XIX Vodka, launched in December 2021.

In 2018, the Sidemen, True Georgie, and Viker Limited released a game called BoxTuber, designed to promote KSI and Logan’s fight. The game was available on iOS and Android until its removal from the app stores.

On August 6, 2017, KSI left the group and released a diss track targeting the Sidemen. Some believed the diss track was fake and was for clout, but it turned out to be true that it was called The 2017 Sidemen War, also known as the Sidemen Beef or Diss Track season.

The good news is that KSI is still part of the Sidemen group; the group members have grown beyond their differences and are now more united. Their influence has broadened, content has improved, and views have skyrocketed.

Periodically, KSI engages in boxing fights against popular YouTube names like Logan Paul and Liam Payne. He began boxing as an amateur when he fought against former friend Joe Weller at the Copper Box Arena in the Queen Elizabeth Olympic Park on February 3, 2018. He won by stopping Joe Weller through a technical knockout during the third round. 1.6 million people were live viewers of the battle on YouTube. Within 24 hours, KSI and Joe’s contest had received more than 21 million views.

One of the most Iconic boxing fights KSI has been involved in was his fight with Logan Paul. Logan is another famous American YouTuber born on April 1, 1995. Logan and KSI were after each other with a series of tweets. As much as it was entertaining for their fans, things were heating up between them. They decided to let it all out in a boxing fight which they dubbed “the biggest internet event in history,” and held at Manchester Arena on August 25, 2018. The stage pay-per-view boxing battle was fought, with 120,000 tuning in via pay-per-view, 225,000 views, and an additional 1.2 million tuning in via Twitch broadcasts.

KSI and Logan were still brewing a more bitter feud after the first round ended in a draw. On November 9, 2019, they scheduled a rematch at the Staples Center in Los Angeles. DAZN USA aired the second boxing fight between Logan and KSI. 1.3 million people paid for the Pay-Per-view rematch, bringing around $13 million in income. Looking at the bright side, Logan and KSI made roughly $2 million each from the match.

KSI’s rematch with Logan is counted as his first professional boxing with a record of 1-0 in 2019.

Aside from being a famous face on YouTube, KSI is known in the music space in the UK. KSI released his first single, “Lamborghini,” featuring MC P Money, on March 23, 2015. The song was done with Dcypha Productions and ranked number 30 on the UK Singles Chart.

His first album, “Keep Up,” was released as an EP on November 13, 2015, and was fully released on January 8, 2016, through Island Records. He also released another EP titled Jump Around, released in 2016. Island Records later released Jump Around’s full EMp on October 28, 2016, and One of the EP’s songs, “Touch Down,” featuring rapper and singer Stefflon Don, appeared on the soundtrack of Baywatch 2017.

His album, Dissimulation, was released in May 2020. The album made rounds in the European music space, ranking 1 in Ireland and 2 in the UK. He featured Rick Ross, Lil Baby, S-X, Aiyana-Lee, Lil Pump, and Smokepurpp in the album.

KSI followed up with All Over the Place music album, released in January 2021. The 16-track album topped the UK Albums Chart and featured Craig David, Digital Farm Animals, and Anne-Marie.

KSI is not slowing down in his music career as he went on to feature legendary singer Lil Wayne in a song titled “Lose” (2021). KSI is signed with Island Records.

On June 19, 1993, KSI was born in Watford, England, to Nigerian parents, Jide, his father from Ibadan, and Yinka, his mother from Islington, London. He is 29 years old, and although he goes by numerous nicknames, he chooses to go by KSI, which means Knowledge Strength Integrity, as he tattooed it on his body in 2017. KSI attended Berkhamsted School Simon Minter, who later joined the Sidemen group.

KSI has a brother names Deji Olatunji born December 9, 1996, 25 years, and known by his YouTube channel, Comedy Shorts Gamer. Like KSI, Deji is famous on YouTube, with over 10 million subscribers. He joined YouTube in December 2011, uploading gameplay videos, and has also delved into boxing just like his older brother KSI. His first bout was with Wassbi in March 2022. Deji is also into music; he has released many singles and featured Jallow in Playboy Mansion song.

Arsenal football team remains KIS’s favorite football club. At a point in time, he has played FIFA with various current and former Arsenal players, including Alex Oxlade-Chamberlain and Mesut Ozil. He has even been featured on a YouTube channel dedicated to Arsenal football club, AFTV.

As a celebrity, everything about you matters to your fans; as much as that could be a good thing, sometimes it can be bothersome. Like for KSI, who at a Eurogamer event in 2012 was accused of harassing women and assaulting spokesmodel Brandy Brewer. Yes, he did motorboat her, but she came out to say it was all a joke; according to her tweet, “I consented to the motorboat it’s called comedy……relax.” Sadly, KSI has already been banned from attending any future Eurogamer events.

KSI and his brother were once listed as the first in the UK’s Most Influential YouTube Creators in 2015., while his brother, Deji, was second on the list. In 2016, KSI was nominated the Vlogger of the Year by the NME Awards, and in the same year, he received a Diamond Creator Award/Youtube Creator Reward at the 2016 YouTube Creator Awards. In 2017, Sidemen’s Sidemen: The Book” was nominated for a British Book Award in Non-Fiction: Lifestyle Book of the Year.

KSI has received several recognitions, such as;

He has received content-creating-related nominations such as Best Gaming in 2012, Best YouTuber of the Year in 2017, and best YouTube Ensemble in 2019. He was also nominated for a Teen Choice Award on BBC Radio 1 for Best British Vlogger.

KSI has made appearances in some movies, and I bet you did not know that. Well, here are they below;

I hope you enjoyed the article. Did I miss anything? Let me know in the comments.