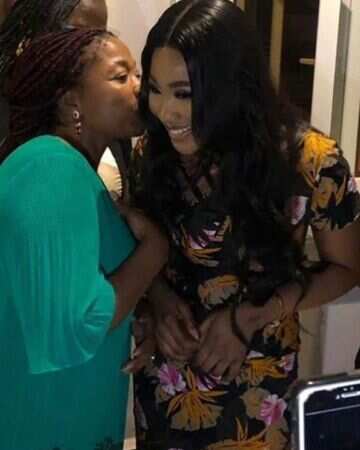 Kiddwaya’s mother, Susan Lulu Waya has shown full support for the union of her son, Terseer Kiddwaya with Erica Nlewedim. The duo met during the 5th season of the BBNaija TV show, where they had something going on between them – they were in love. Fans were rooting to see the two walk down the aisle and Kiddwaya’s mum is in support too.

Susan Lulu Waya made an appearance at a meet-and-greet event prepared for Erica in Abuja on October 2nd, 2020. She said she was there to welcome the “Elites” – Erica’s fans, and to show her support for Erica and Kiddwaya getting married. She saw son’s love interest in Erica during the Big Brother Naija reality TV show and wants to see it actualize to a marriage.

Standing next to Erica during her speech, Susan Waya said

I see myself in this little lady and I’m here to support her. I can’t replace her mother but she’s my daughter. And today, I want to confirm to you, I am KiddRica.

After her touching speech, she hugged and petted Erica. Watch the video below.

KiddRica, the word she coined from Kiddwaya and Erica was to serve as a moniker for the wedding. Fans who are rooting for them to get married refer themselves as KiddRica shippers.

Erica didn’t seem to have a different opinion about getting married to Kidd, she is all in for a wedding.