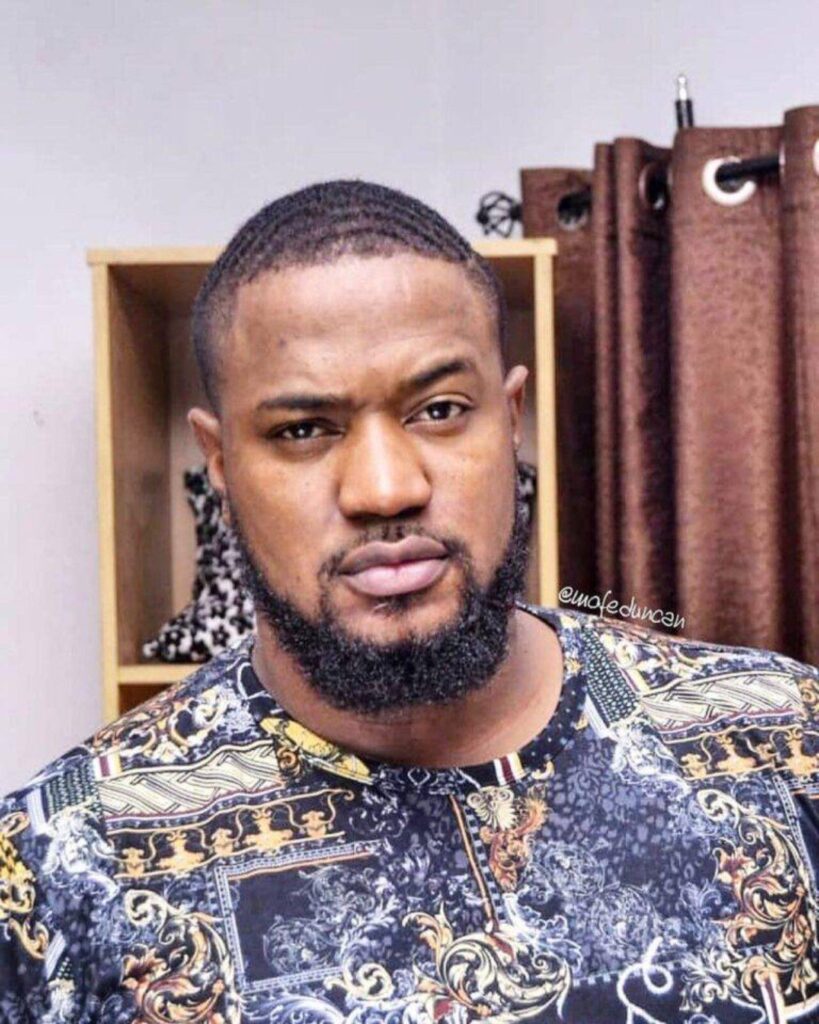 Mofe Duncan is a popular Nollywood actor known for his roles in blockbuster Nollywood movies. He is best known for the roles played in movies such as The Three Kings, Talking Dolls, and Love Like a Fire. He was born on 28th May 1983 into the Christian family of Professor J.T.K Duncan and Mrs. Molly Thomas. His origin can be traced back to Delta State, a south-south state most dominated by the Edoid Urhobo-Isoko. He is the seventh and last child out of his parents who were based in Lagos. His passion to act was not realized until he graduated from the university, currently, he has featured in various Nollywood movies including Love Like Fire. In this post, I will write about Mofe Duncan’s biography, his relationship (wife), his career, and his net worth. Let’s look at his profile.

You probably know him as Mofe Duncan, but his real name is Josbert Thomas Kwamina Eyimofe, he is from Itshekiri in Delta State, born on 28 May 1983. He is the last child of the seven children of Professor J.T.K Duncan, medical doctor, and Mrs. Molly Thomas, a banker. He attended the University of Lagos (UNILAG) and graduated with a degree in Biological Science.

Check out: Stephanie Okereke’s net worth will blow your mind

He was married to Jessica Kakkad, a skincare business woman, on 22nd August 2015. He met her in an event he anchored when she got his attention. According to him, Jessica was enough distraction from every other thing. He knew he would get married to her after he saw her “caring” qualities when she visited him in the UK. They got married after much opposition from their families. Sadly their matrimony crashed on June 26, 2019, after 4 years, although Mofe claimed the marriage ended in 2018, a year earlier.

Giving a hint on why he broke up with Jessica, he said, “you won’t dance with someone who doesn’t want to”. However, Duncan who has been rumored to have been in 3 marriages is engaged to another lady, a non-Nigerian.

Other facts you want to know about him is that Mofe is of a Christian faith and a big fan of DC comic character, Superman. His five-sisters-one-brother sibling distribution made him a feminist. He prefers R Kelly, horror movies, and games, red cars thrill him most, and he is allergic to grass.

Mofe Duncan started acting after he left the university. At the age of 5, he made appearances on TV when he modeled for Nestlé, a food company. He is best known for movies which he featured in, such as Talking Dolls, a 2017 movie where he played the role of Kennedy, and Love Like Fire. He also featured in a popular movie titled Dark Past, where he featured alongside Chika Ike, and Mercy Aigbe. Other movies he has made appearances in are;

Over his career in Nollywood, he has worked with top icons in the industry such as Chika Ike, Timini Egbuson, Bimbo Ademoye, and Bisola Aiyeola. He progressed to becoming a movie director and writer after years of experience. He directed and wrote a movie titled The Three Kings.

The Three Kings is a 2018 movie about three cousins in dire need of money. They later on the run when they agree to receive and drop off a package for a notorious drug baron. The movie featured the likes of Sophie Chittenden (Hannah), Grace Echeta (Mrs. Okafor), Matthew Faucher (Stephan King), Lucien Morgan (Snow White), and Angela Prince (Gangsters Moll).

Mofe is the CEO of 5ive28, an entertainment company that deals with event planning, media coverage, film making, and freelance photography.

Mofe Duncan is a popular actor in the Nigerian movie industry. He is rated one of the richest and influential actors and his net worth is about $5,000,000. Aside from his acting, he makes a living as an MC (master of ceremonies).