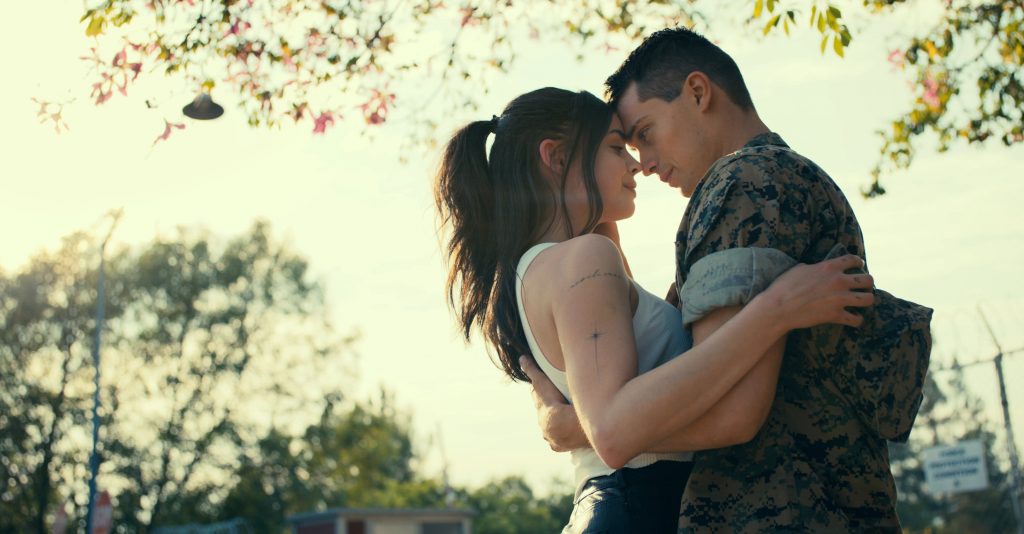 You call it Love they call it Purple Hearts. Can two people pretend to be in love and finally be in love? Ok, let’s talk about love. This is going to get the ladies excited. The Purple Hearts movie is the kind of movie that will intrigue anyone who enjoys love stories. Spoilers ahead If you have not watched it yet, head over to Netflix. Continue reading if you are interested in Purple Heart’s synopsis or summary.

Purple Hearts is a 2022 romantic movie based upon the Purple Hearts novel by Tess Wakefield. It is available on Netflix and was directed by Elizabeth Allen Rosenbaum. Purple Heart is another excellent watch that perfectly describes the phrase “From enemies to friends, then lovers.”

Cassie (Sofia Carson) first found fame when she starred in the Disney Channel movie – The Descendants, where she played Evie- the daughter of the Evil Queen, in the Netflix film Feel the Beat, and when she released her debut studio album earlier in 2020.

In Purple Hearts movie, Sofia Carson played the role of a beautiful, talented songwriter, Cassie, who works in a bar while pursuing her dream of becoming a singer and singing with her friend and co-worker Nora (Kat Cunning) at the club she worked as a means of advertising her talent while Luke is a Marine trainee.
Their paths cross for good when Frankie (Chosen Jacobs), Cassie’s childhood friend, comes home with Luke and his other Marine friends for a short break. They drop by the bar where Cassie walks up to say hi. There, Cassie meets and talks to Luke, who ordered a coke, the complete opposite of the tequila his friends called for.

Cassie had been diagnosed with diabetes, and with her hospital bills on the rise, she reaches out to Frankie and tries to persuade him to marry her when she discovers from Nora that Marine Corps get allowances for medical insurance as soon as they get married. Frankie does not help her as he is in love with Riley (Breana Raquel).
On the other hand, Luke is indebted to Johnno(Anthonio Ippolito) for $15,000. He would need the extra grand given to all married Marine Corps. He meets Cassie and offers to marry her so they can both solve their issues. She agrees after questioning his intentions and reasons for helping. They get married just before Luke leaves for Iraq with the full knowledge that the act is punishable by law.

Cassie and Luke have to pretend to be in love to deceive their friends, family, and even the Marines for fear of being caught. They wrote to each other often and made periodic video calls. On one occasion, Cassie sings the song she had written, “Come back home.” With uniquely crafted lyrics, this song tells the story of those in the Force and shares their fears. Cassie gets a spot to sing in public which is a big win for her career.
The marines are involved in a war where Frankie losses his life and Luke gets badly injured and hospitalized. During this period, the Morrow family learns of Luke’s relationship with Cassie and gets them together unintentionally. Slowly, the lines between reality and pretense begin to blur. Do they ever fall in love?

Luke repays his debt to Johnno and tries to fix his life by turning a new leaf not before Cassie finds out about his evil past. She leaves him in anger. Everything moves on gloomily till Johnno leaks Luke’s secret. When the Marines find out, he is taken to court when he takes all the blame for Cassie’s sake. He is given a six months suspension as a jail term. Cassie does not fail to bid him farewell and leaves him a promise to wait for him. Will she wait?