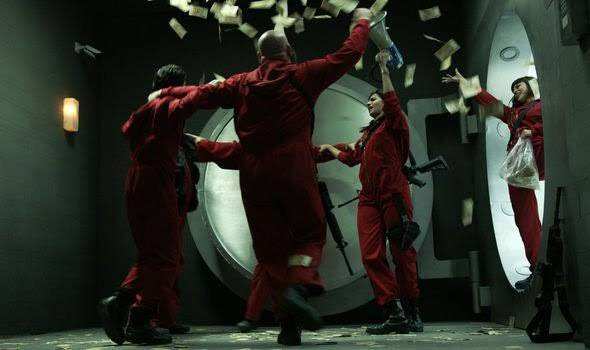 Money Heist is an exciting series with a captivating fusion of real-life situations, love, hate, bitterness, integrity, intelligence, and even criminology. The Award-winning series – Money Heist is not without lessons we can learn from it. The movie centers around a group of criminals who wants to do good to the general public by doing bad. In the middle of each heist, they face real-life challenges, the lessons one can learn.

And the reason is not far-fetched. Your life is already on a fifty-fifty basis. The captors are not dumb enough to let you go, just as we saw in the movie, although they later gave freedom to the hostages who chose freedom. But, since your life depends on the person asking you to help print more money and get a reward later, that means, at the end of the heist, you will be alive, and at least you’ll have a prize for being a hostage.

It was love that bonded Denver and Monica. Love attracted Rio to Allison Parker even though he was currently in a relationship with Tokyo. It is only love that can connect a hostage to a kidnapper. It is called Stockholm syndrome. Love made Tokyo dash back to the crime scene after being freed from a prison convoy.

After Berlin rolled out Tokyo to the police in a rash revenge decision, Nairobi stepped up to get the team working again. At some point, it became too heavy on her, but she took a bold step by leading other men on a mini-coup over Berlin. Back at the tent where the police temporarily carried out investigations, a woman – Agent Raquel- was in charge. Despite having personal family/love issues, Agent Raquel was able to crack the money heist case, although Professor – Sergio Maquina was playing her.

Out of love, women make the worst decisions. The worst decision in the Money heist was when Tokyo, due to her degenerate impatience, rode back to the money mint factory so that she could be with Rio, who has a thing for Allison Parker. What a shame. She could wait for the professor in hiding and reunite with Rio later.
Agent Raquel is confused about love; let me put it that way. Despite being a top detective on-ground, she could figure that Salva was a disguise, even when the evidence was glaring. She once decided to get herself killed by going towards the defense line after she learned that Agent Angel had an accident that led him to close to death.

4. The government only protects what is governments

You recall when the Intelligence unit forced Agent Raquel to accept a deal where only Allison Parker, daughter of a top UK politician, would be freed in place of 8 hostages. This shows that when it gets to a tight end, the government will only protect what belongs to the government.

Kenyan government deports “Jesus” and arrests pastors who invited him.

5. Criminals have emotions and feelings too

In the first season of the movie money heist, we saw how the thieves meddled with the hostages. Berlin found himself a personal secretary, and Denver found himself a lover who was pregnant – Mónica Gaztambide. Little Arturo was loved and cared for by Helsinki, not until he caused Oslo’s death. Even Tokyo tried to hook up with Allison Parker. Nairobi talked Allison Parker out of her low-self esteem and cowardy.

7. No policeman should be all-sacrificing, they have families too

Many times in the movie Money Heist, we see police officers instead surrender than lose their life. That was how the criminals got into the money mint. A police escort was compromised without the police officers trying an attempt to resist at gunpoint. The money or their life, they choose their life.
Tokyo was freed the same way. The policeman with a gun pointing at her head couldn’t risk dying if he shot her.

When the first batch of hostages escaped, a hole was made in the mint. It took the criminal’s collective effort to resist the SWAT from entering. Tokyo rolled out a machine gun that scared the SWAT team away, after which the criminals collectively raised an iron blockade in less than a minute.

9. Men can be scum, afraid and fearful

Little Arturo, as Berlin fondly addressed him, is a typical example. He comes up with an escape plan but can’t carry it out without risking the life of a student or his lover. His third escape plan worked, but the same Arturo leaked the escape plan to the captors after being scolded by Helsinki. He was scum. Even after reducing the chances of survival, he still feels he can motivate his fellow hostage to rebel.

10. Even the rich want a normal life

Allison Parker, the daughter of a top government official in the UK, was constantly bullied in school. To stop that, she offered herself to the chief bully, who duped her by posting her nude picture on the internet. All she wanted to have was the average life of a teenager. Nairobi got to her and talked her out of her misery. Anyway, Nairobi regrets it.