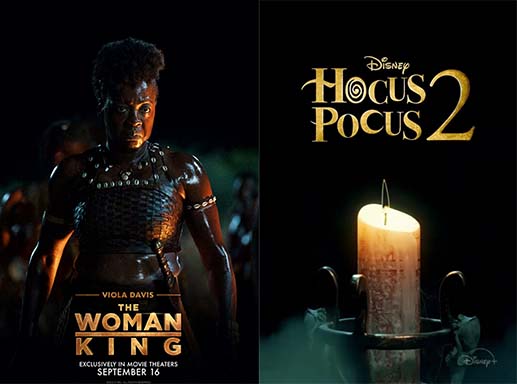 So excited about September; Wow, waited for so long. Movies and series airing this September are the fire. Actions from Viola Davis (How to get away with murder) to funny Sarah Jessy parker, will grace the screens this September. Can’t wait. The list of movies to expect is endless, but the top on my list is Hocus Pocus 2 and The Woman King. Why?
The spectacle of excellence on screen and previous productions from the directors of these movies makes it a lovely chocolate sight to behold. Let’s look at the directors and their many exploits.

With the direct tutorage and encouragement of Shankman, who moved from choreography to directing with blockbusters like 2007 “Hairspray” and the legendary “the wedding planner,” Anne has given the screens the beauty of intense excitement. From ” step up,” which was nominated for two teens awards and one youth award in 2007, to 27 Dresses received multiple mentions and nominations from the golden trailer awards, EDA awards, Artios awards, etc.

The movie damsel is known for her mixture of romance and comedy in presenting a refreshing and satisfying movie. Her plans and casts for HOCUS POCUS 2, a sequel to the 1993 blockbuster, are believed to continue the story of max. Here is a trailer.

Teenager Max Dennison (Omri Katz), after moving to Salem, explores an old house with his sister Dani (Thora Birch) and their new friend, Allison (Vinessa Shaw). Various events unfold as Max accidentally frees a coven of evil witches (Bette Midler, Sarah Jessica Parker, Kathy Najimy) who used to live in the house. Now, with the help of a magical cat, the kids must steal the witch’s book of spells to stop them from becoming immortal; the witches chase the children all night in an epic event of spells and magic. The teenagers finally break the spell and trap the witches from whence they come. But, the tail end of the movie reveals that the spell book is still alive, which means the witches will be back… And my oh my. They are back.
Can’t wait for the sequel this September 30th.

Yes, Viola is part of the production…looking at the trailer of this exciting piece, one can only scream, wow, The movie is a notch to the top, apt and excellent. I never knew I would see viola doing sword fights, street fights, and fight war, yes fight a war. The movie is Set in the 19th century in the African kingdom of Dahomey. The Woman King follows the all-female group of warriors, the Agojie, who protect the domain. The group’s general, Nanisca(Viola Davis), trains a new generation of warriors to fight against an enemy who wants to destroy their way of life can’t say more. I wouldn’t know more, but this movie is the bomb. Watch the movie trailer.

The casts are Sheila Atim (as Amenza) and John Boyega (as king Ghezo), never knew John could play a king role., Hero Fiennes Tiffin (Santo Ferreira) – Yea, young lord Vermont of harry Porter, Adrienne Warren (Ode), Lasha lynch of marvels doctor strange, captain marvel, and M16 female 007.
The movie promises to be massive. Woman king will be showing in the USA on September 16th, 2022. Let’s know what you expect in the comments section.