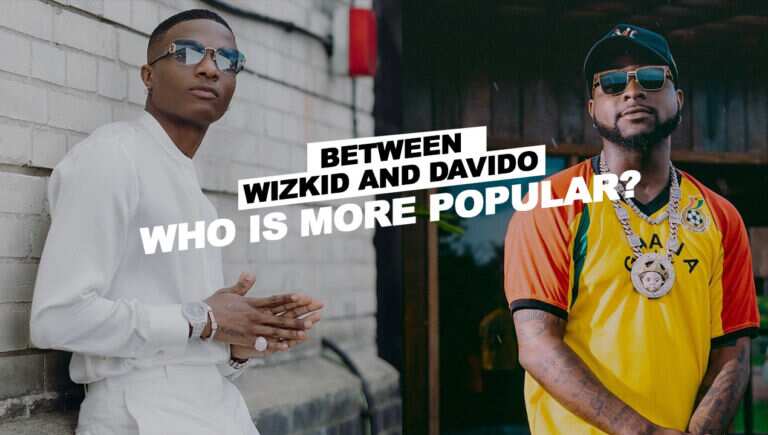 Davido and Wizkid are undoubtedly two of the biggest musicians on the African continent aside from Burna Boy.
Their musical prowess in the Afrobeat music genre has crossed the borders of Africa and has made notable impacts in Europe, America, and other parts of Asia.

Both artists are making Nigerians and as a matter of fact, Africans proud, with their remarkable achievements in music. Davido has done international collaborations, so has Wizkid. Wizkid has won international awards, so has Davido too. Their achievements in the music industry make it look like they are in a competition, but in fact, they are not.

They are two good musicians doing what they do best, music. So who is better? Who is the richest amongst them and who is more popular in the world?

How do two of them stack up against each other? Who has a bigger global influence?

We will answer all those questions in detail and with verifiable facts.

Wizkid and Davido, Who is more popular in the World?

I can’t go over the world asking everyone if they have heard of Davido or Wizkid, but I can use data from the internet to reach a conclusion of who is better. To tell between Wikzid and Davido who is more popular in the world, I will be using the following analysis.

Social media is like a global village. Anyone who doesn’t have any social media account is either living in an internet-forbidden place or not acquainted with modern technology. In Africa and many parts of the world, it is a key factor in determining the influence of celebrities and public figures.

Here is a table that summarises it all.

Davido tops the chart when it comes to Instagram and Twitter following among African celebrities. A record he has held for more than 5 years.

From the analysis, it is evident that Davido is more popular than Wizid on social media (Instagram and Twitter).

If you are a regular YouTube user, the analytics aspect won’t bother you much, unlike YouTube content creators. YouTube views count is also an important metric in measuring a video’s influence, reach, and success. American Rappers like 6ix9nine Takashi trended worldwide with his hit song “GOOBA ” which amassed 43 million views in 24 hours and still counting.

We will now pull data from YouTube to see who leads on YouTube between Wizkid and Davido.

So let’s see the table.

Davido wins this round as well. Two points ahead of Wikzid.

As I have mentioned earlier, Davido and wizkid have recorded successes globally. They are more like the icons of Afro-beat and have joined the list of global icons from Africa.

Davido and Wizkid have both had collaborations with other musicians across the world.

But for the record, Davido has done collaborations with artistes such as,

Wizkid has also done collaborations with musicians such as

International collaborations increase an artist’s global audience reach and boost their fame. For this comparison, both Wizkid and Davido get a point each.

The business side of music cannot be overemphasized. As an artist tends to gain more audience, he or she attracts Brands who pay them for endorsement deals.

Businesses and legal corporations play a major role in measuring the influence of musicians. This is because musicians sign multi-million deals with major corporations in exchange for brand promotion.

For Wikzid and Davido, they weigh an even scale when it comes to endorsement deals.

Wizkid has worked with global brands including;

Davido has worked with global brands including;

Both of them get a point each.

This part of the comparison gives room for debate but nevertheless will be measuring the reach of Wizkid and Davido’s song by YouTube views per music video and traction.

Davido wins again. His 2019 album, A Good Time, reached over a billion streams across all platforms. It’s the latest record-breaking feat for him. Also, his single “Fall” was certified gold in the US and Canada in 2020.

Both Davido and Wizkid have made wonderful contributions to the Music industry worldwide.

Davido has been recognized by the organizers of the following awards;

Wizkid has been recognized by the organizers of the following awards;

This round is the third tie.

In case you didn’t know, Google has a tool where you can check the search volume of any term, head over to Google Trends.

So to find out between Davido and wizkid, who is being searched for most on Google. We put in the search terms, (“wizkid”, “David”), without the brackets, and run a query, setting our coverage to “Worldwide”, and time range to “Past 12 months”. Here are the results.

Wizkid (blue) currently wins at “Interest over time”, due to seasonal changes in search volume. He just released an album “Made In Lagos”.

On average, Davido (red) has more people worldwide searching for him on Google.

The image above shows that, in regions worldwide (red), Davido is searched for most.

Both Wizkid and Davido are doing excellently well. They have set records and acquired laurels. Between the two musicians, no competition exists. But fans just love to brag and weigh artists on a scale, all for the fun of it.

As of 2020, Davido is more popular than Wizkid, but the stats are bound to change. It’s that volatile in the entertainment industry.

When you’re on top, the only way to go is down.

So, we can safely conclude that Davido is more popular than Wizkid.

That’s my verdict based on the analysis and data that are easily verifiable on the internet. So what are your comments? Don’t forget to share this post with others.

Times change, so we will update this post after three months.