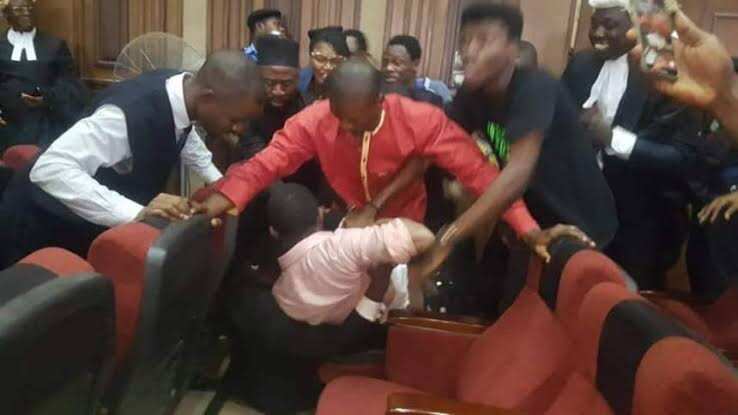 Following the re-arrest of Omoyele Sowore, a Nigerian human-rights activist arrested by DSS operatives during a federal high court sitting, are series of negative blunt comments by Nigerians on the current President of the country, President Buhari and the thuggery displayed by DSS operatives.

Many Nigerians took to social media to wail the failing democracy of Nigeria in the hands of Buhari due to the re-arrest of the Nigerian human-rights activist, Sowore. Several News reports have it that some DSS operatives stormed the federal court in Abuja chasing away the Judge to re-arrest Sowore a few months prior to his initial release. Sowore Omoyele and the likes of Deji Adeyanju has initially being arrested for staging a protest against some government laws and bills.

While some are against the re-arrest of the human-rights activist, others are in support even as a lawyer could be seen hitting Omoyele Sowore on the head as Sowore stays on the ground during the struggle in the federal high court. Also, a few Nigerians were seen in a protest, supporting the re-arrest of Omoyele Sowore. However, sources say that these Nigerians were paid off to stage the protest and hold no tangible motive.

The undemocratic barge-in by DSS operatives caused an uproar in the high court which hasn’t settled up till the time of this post.

FLASH: There is growing fear among supporters and family members over the state of health of pro-democracy campaigner and journalist, Omoyele Sowore, after the 48-year-old activist was struck by an unidentified man in court in Abuja on Friday morning. #FreeSowore #FreeSoworeNow pic.twitter.com/lZV4Sa9zHj

Reliable sources confirm that Omoyele Sowore is currently held in DSS custody after the tussle in the federal high court.

However, neither of the government arms or the presidency has released any statement regarding this matter. Meanwhile, the social media is raging with comments and reactions by note-worthy Nigerians like, Atiku Abubakar who said that Nigeria is a democracy ruled country and not military ruled.

Nigerians on social are without micing words bashing the presidency, it’s supporters and the DSS. Many cry out that democracy is dying out in Nigeria and that she’s heading to a military regime under the watch of President Buhari who was re-elected this year, 2019 for his second tenure as president.

Reacting to the underserved re-arrest of Sowore, a Nigerian says Sowore could have Buhari’s n*des stashed somewhere.