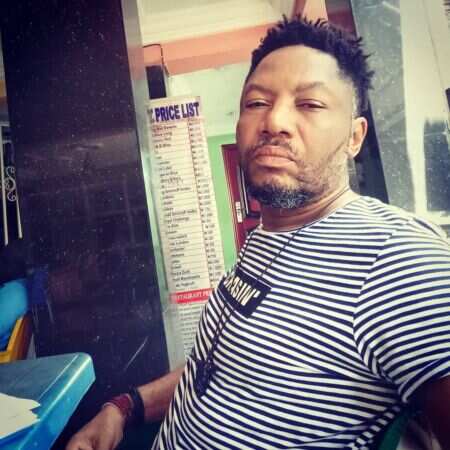 Ernest Obi is a popular Nigerian actor born in Anambra, southwestern part of Nigeria. He is also a movie producer, entrepreneur, versatile television personality, and renowned philanthropist. Ernest grew up in Lagos where he had his nursery and primary education. He is a graduate of Obafemi Awolowo University in Osun state. Ernest is popularly known for the role he played in “Glamour Girls”, the movie that brought him to the spotlight. Ernest Obi’s biography, his wife, movies and Ernest Obi’s net worth will be covered by this post as ou mean to read on

Ernest Obi was born on the 21st of June, 1970 in Anambra State into a royal family. His father is the Oba 1 of Ukpor and his mother, Eugenia Uzoamaka Nwachinemere Egwuh was a princess. Ernest has lost his mum a couple of years back. Ernest was born into a family of 9 children in Anambra State but most of his early life was in Lagos state. Ernest had his nursery and primary education at Onward Nursery and Primary School, Surulere Lagos. He attended Baptist Academy Secondary school, also in Lagos. He moved on to study Dramatic Arts in Obafemi Awolowo University at Ile-Ife, Osun State where he graduated with a bachelor’s degree. After he graduated from the university in 1995, Ernest joined the Nollywood movie industry. Ernest traveled to the United States of America to study Movie Directing, Cinematography, and Editing at the New York Film Academy to enhance his skills when he spotted some errors that needed to be corrected in the movie industry.

Ernest Obi before he joined the movie industry in 1995, he worked as a manager for a shipping company. He quitted the high paying job because he didn’t have any passion or motivation for the Job. When he fully went into acting, his mother wasn’t supportive but she later came through after he found out that his son was relentless. Ernest Obi was once the Chairman of the Actors Guild of Nigeria, Lagos branch. Ernest throughout his career has been described as a skillful actor. He has featured in various movies including;

Ernest Obi has won various notable awards and accolades throughout his acting and movie directing career. Some of the awards he has won includes;

Ernest Obi is married to his long time girlfriend, Evi Oki, whom he dated for about 8 years. Evi Oki happens to be an actress too. A gorgeous wedding ceremony noted their union and it’s blessed with beautiful children

Ernest Obi is one of the richest and accomplished Nollywood actors. He is rated to be one of the most influential and talented in the industry. Ernest Obi’s net worth is an estimated $2.5 million.