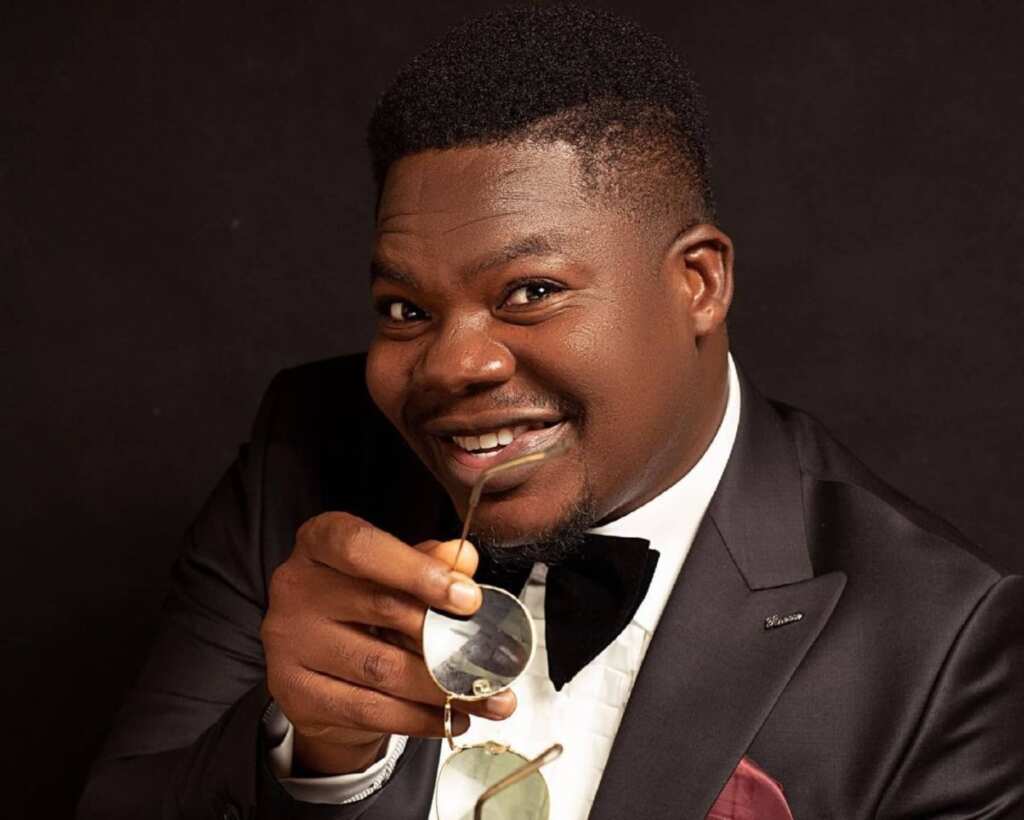 Who is Mr Macaroni?

Mr Macaroni is a renowned Nigerian actor, film producer, acting comedian, and MC. He celebrates his birthday on May 3rd, 1992. Mr. Macaroni was born into of family of 10 children – 6 girls and 4 boys. Mr Macaroni grew up in Abebi, Ojota in Lagos. Mr Macaroni has become one of the popular acting comedians. He studied theatre arts at Redeemer’s University and he grew up mimicking several television personalities. In this piece, we will be writing on Mr Macaroni biography, age, comedy and acting career, education, net worth, and other facts about him. First, let’s look at his profile.

Mr Macaroni’s real name is Adebowale Adebayo. He was born in Lagos on May 3rd, 1992. The versatile thespian is 28 years old as of 2020. He was born into a family of 10 children – 6 sisters and 4 brothers. His father is a Journalist and his mum, an Educationist. Mr Macaroni grew up in Ojota in Lagos, but he hails from Ogun State, a state in southwestern Nigeria predominantly occupied by the Yorubas. Mr Macaroni during his early days enjoyed mimicking Pastor Chris. He loved Pastor Chris Oyakhilome’s charismatic character and how he always has the right word each time. Mr Macaroni is not married, during an interview he revealed he was a virgin and he takes it very seriously so that he wouldn’t be misunderstood.

Mr Macaroni attended Tendercare School in Ojota then. He attended in Babcock University High School for his secondary education and graduated in 2009. Also, he obtained B.A, Theatre Arts at Redeemer’s University. Before he graduated from Redeemer’s University, he had previously attended four Universities. His first University was Lead City University where he applied to read law. Sadly, the university didn’t have the accreditation to teach law as at that moment, so he left Leadcity university after much protest. Mr Macaroni went ahead to apply to Houdegbe North American University in, Coutono, Benin to study law. He left the university after he had a dispute with one of the lecturers during an examination. The problem almost got physical so he had to leave HNAUB. Mr Macaroni later applied to Afe Babalola University in Ekiti State, to study theater arts. Unfortunately, the university was not offering theatre art then, so he was offered English and Media studies. He wasn’t impressed with the course and had to leave ABUAD after two years.

Meanwhile, Mr Macaroni was a committed student of the University, representing the institution even up to the government level. He was the president of the Student body (Redeemers University Student Association) and was so committed to making an impression in the school.

Mr Macaroni’s parents could not take it, so they took the case to court. Later on, Redeemer’s University retracted its statement and settled the case outside court. Mr Macaroni finally graduated from Redeemer’s University in 2018 with a second-class upper in theatre arts. He also completed his National Youth Service Corp (NYSC) program in 2020. It took Mr Macaroni 10 years to complete his tertiary education.

Mr Macaroni is popularly known as a comedian. But he ventures into several aspects of entertainment such as acting, compere, TV host, and digital marketing. His comedy skills can be described as innate, as he perfectly mimicked TV personalities. His mimicking skills helped him to harness his acting skills. In primary 6, he played a role in Williams Shakespeare’s Merchant of Vernice. In his Secondary school days, he acted with a drama group. Mr Macaroni also runs a Theatre Troupe and has performed at Babcock University, Adeleke University, The Oriental Teacher’s Conference to mention a few.

Mr Macaroni got his name after he left Houdegbe North American University. He acted in a sitcom titled “Face 2 Face” where he was taken up an extra role and the director needed a name for his character, that was how Mr Macaroni coined the name – Mr Macaroni.

Mr Macaroni left university in 2014 to pursue his dream of being an actor professionally at the PEFTI film institute. He started attending auditions even when he got back into a University. The first role he landed via audition was in a movie titled “Mistresses”. The movie was produced by Halima Abubakar and directed by Ifeanyi Ogbonna. He was later featured in several movies and soap operas. Other popular movies he has featured in include, Jenifa’s Diary, House 31, Royal Outlaw, and SuperStory. He directed and wrote a Yoruba-based movie – “Oba Ara”.

Mr Macaroni initially didn’t want to act comedy videos for social media because of his experience in professional acting. However, being an actor, he had to wait for a role before he could do what he loves doing most, acting. He developed an interest in acting comedy videos when he noticed how other popular acting comedians on Instagram such as Maraji, and Bro Shaggy thrilled their audience. Ever since Mr Macaroni started acting comedy on Instagram, he has become a sensation in the Nigerian entertainment industry. He is known for his favorite words in his comedy video which are “Fantabulous”, “Freaky Freaky”, “You are doing well” and “Ooin”. Mr Macaroni’s comedy videos were satirical as he focuses on acting like a man who has no control over himself around women and ends up in a sad experience. He used to act as a school teacher in his comedy videos but now he mostly acts like a rich man who lacks self-control whenever he sees a beautiful lady. He has acted alongside the big names in Nigeria’s comedy industry such as Basketmouth and Bro Shaggy.

His brown agbada has become his signatory costume. He first appeared on it in his comedy video where he played a “Sweet Daddy” character. He became fond of it after we wore it in Falz’s music video following the costume department’s approval. According to Mr. Macaroni, the Agbada is a symbol of a wealthy man in Nigeria. M. Macaroni has more than 700 thousand followers on Instagram an still counting. He runs a digital firm, Mr Macaroni Entertainment Ltd. which is focused on creating viewable promotional content for brands.

Mr Macaroni has become a sensation in Nigeria’s entertainment industry. His net worth is an estimated $200,000. His sources of income include his comedy videos where he promotes brands and his acting career.